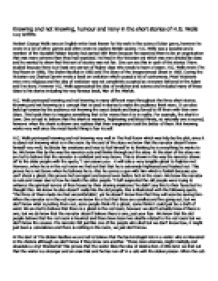 Knowing and not knowing, humour and irony in the short stories of H.G. Wells

Knowing and not knowing, humour and irony in the short stories of H.G. Wells Lucy Griffiths Herbert George Wells was an English writer best known for his work in the science fiction genre, however he wrote in a lot of other genres and often wrote to explore British society. H.G. Wells was a socialist and a member of the Socialist Fabian Society but parted with them because he expected them to be an organization that was more extreme than they had expected. He lived in the Victorian era which was very divided by class and he wanted to show that this sort of society was not fair. One can see this in each of the stories I have studied because there is at least one person of higher class who needs to learn a lesson. H.G. Wells wrote The Red Room in 1896, The Stolen Bacillus in 1895 and The Story of the Inexperienced Ghost in 1902. During the Victorian era Charles Darwin wrote a book on evolution which caused a lot of controversy. Most Victorians were very religious and the idea of evolution was not completely accepted as everyone believed in the Adam and Eve story. However H.G. Wells appreciated the idea of evolution and science and included many of these ideas to his stories including his very famous book, War of the Worlds. H.G. Wells portrayed knowing and not knowing in many different ways throughout the three short stories. Knowing and not knowing is a concept that is used in stories to make the audience think more. It can also build up tension by the audience not knowing the exact details and being forced to fill them with their own ideas. This leads them to imagine something that is far worse than it is in reality. For example, the shark in Jaws. One is lead to believe that the shark is massive, frightening and blood thirsty, so naturally one is scared, however when the shark is shown one realises that their imagination took the better of them. ...read more.

In the Victorian time men were not supposed to show their emotions but at the end when the old people are looking after the narrator he says that there is only fear in the room, 'in all its nakedness - Fear!' This would have been funny for Victorians because it would be a mixture of shock and humour because it makes the man seem weak and stupid. It portrayed him as a weak man by him showing his emotions and since they were negative emotions it makes him look smaller. It shows stupidity because it's unwise to get so worked up on your own fear. In The Stolen Bacillus there are many humorous occasions including the cab chase. In the cab chase I find the accents of the 'cabbies' hilarious especially the way their dialogue is written. Another comical effect is the fact that because the cholera isn't cholera and tricked everyone. And since the bacteriologist doesn't get his poison back it makes the cab chase pointless. The actual thought of this cab chase though London in the middle of the day with one man in his slippers is also humorous, especially in the Victorian times because everyone cares more about what they look like and are seen doing. This is shown in Minnie and in the way se panics about what her husband is wearing. However there are other funny things in the story but ones that aren't as straight forward as before which can include the anarchist who doesn't have a clue that the poison he has is not cholera which he wants and when we find out that the poison will turn him bright blue because he drinks it. And to top off all that's going on all Minnie cares about is that the bacteriologist doesn't have is shoes and coat on just slippers and she doesn't want the neighbours to see. ...read more.

The Red Room works the best because it sounds realistic and could be a true story which is what I like to hear, it also has a good climax as it builds up slowly but steadily from meeting the old people to the start of the journey. The tension builds up faster from the journey to the room, to the mysterious actions that happen inside it until the point where the narrator falls. Throughout the story they repeat lines, mainly in the first half, and by doing this things stay in your head for longer, e.g. the old woman repeats 'This night of all nights!' and through out the story you think 'why did she say that'. It also makes you think if you were in that situation "what would I do". The Stolen Bacillus doesn't work because it's so boring and no one really cares that an anarchist steals a bacteriologist's "cholera" and runs away in a cab. Nor dose one care why the anarchist wants the cholera in the first case. At the start it is really hard to work out what's going on, I personally had to read the first page a few time but still didn't understand. The build up of the climax isn't very good either because one second the bacteriologist is at home with very low tension and the next he's out the door with high tension and that just doesn't build up anything so it's wasted. The Story of the Inexperienced Ghost both works and doesn't work. It works because the narrator says it's not true but we should make our own judge meant which makes the audience want to hear it to decide what they think. Also from the 5th last paragraph the tone changes and the pace in which you read increases and you get stuck in. And just like The Red Room it starts to repeat 'it changed'. However having said all of this The Story of the Inexperienced Ghost doesn't work because when Clayton starts talking about the ghost you loose interest because the story becomes too fake and childish. ...read more.