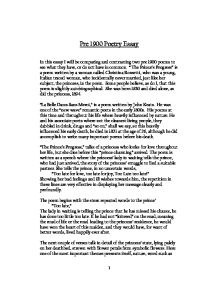 Pre 1900 Poetry Essay In this essay I will be comparing and contrasting two pre 1900 poems to see what they have, or do not have in common. " The Prince's Progress" is a poem written by a woman called Christina Rossetti, who was a young, Italian traced woman, who incidentally never married, just like her subject, the princess, in the poem. Some people believe, as do I, that this poem is slightly autobiographical. She was born 1830 and died alone, as did the princess, 1894. "La Belle Dams Sans Merci," is a poem written by John Keats. He was one of the "new wave" romantic poets in the early 1800s. His poems at this time and throughout his life where heavily influenced by nature. He and his associate poets where not the cleanest living people, they dabbled in drink, drugs and "so on," shall we say, so this heavily influenced his early death, he died in 1821 at the age of 26, although he did accomplish to write many important poems before his death. "The Prince's Progress," talks of a princess who looks for love throughout her life, but she dies before this "prince charming" arrived. ...read more.

The poem is written in two parts, in the first part, a man speaks to the knight asking him questions and describing his dying state, the second, rather heftier part, is where the knight responds to the questions and acquisitions strewn upon him, he describes "a faery's child" whom he met in the "meads." She in turn enticed him, cast spells on him and left him. He was drowned in her mystique and was so in love with this wild being that any noise she made was described by him as a "sweet moan" "I love thee true," That is what the knight believes that this faery is telling him, when in fact he cannot understand a word she mutters, he has just interpreted her moan as words in her mind. The knight was warned of his fate in a dream he had envisaged whilst under a spell cast by his enchantress. In the dream he saw kings, princess and others' "Death-pale where they all," are the words he uses to describe these figures in his dream, death-pale as he seems to the man he has met, all these figures had been enchanted before him, they had warned him; "La Belle Dame Sans Merci Thee hath in thrall!" ...read more.

The poem is set in twelve short four lined verses, the verses help organize the events that happened, the first three are the words of a man speaking to the knight, his response takes up the other nine verses, he tells the events that occurred since his first encounter with the "faery's child." Words such as "sweet" and "honey" tell of the 'sweetness' that this creature shows to the knight. ords are also shared between these poems, unusual but appropriate words used are, "loiter" which speak for the knights stature, perched along a path, and the prince's lack of haste to reach his destinations. Adjectives such as sweet ere used to describe the feminine characters. Here we have two poems, in some senses similar, but in others worlds apart. The both speak of a similar subject, similar scenarios and similar people. Both are vaguely fairy tale orientated, but portray this in a very effective mature way, none seem childish in anyway. I think that this proves that love poems do not have to be soppy love letters written by an author who is head over heals in love; love poetry can be dark, and mildly disturbing. Emyr John ?? ?? ?? ?? 1 ...read more.