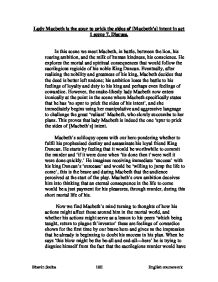 Lady Macbeth is the spur to prick the sides of [Macbeth's] intent in act 1 scene 7. Discuss.

Lady Macbeth is the spur to prick the sides of [Macbeth's] intent in act 1 scene 7. Discuss. In this scene we meet Macbeth, in battle, between the lion, his roaring ambition, and the milk of human kindness, his conscience. He explores the mortal and spiritual consequences that would follow the sacrilegious regicide of his noble King Duncan. Eventually, after realising the nobility and greatness of his king, Macbeth decides that the deed is better left undone; his ambition loses the battle to his feelings of loyalty and duty to his king and perhaps even feelings of cowardice. However, the snake-likesly lady Macbeth now enters ironically at the point in the scene where Macbeth specifically states that he has 'no spur to prick the sides of his intent', and she immediately begins using her manipulative and aggressive language to challenge the great 'valiant' Macbeth, who slowly succumbs to her plans. This proves that lady Macbeth is indeed the one 'spur to prick the sides of [Macbeth's] intent. Macbeth's soliloquy opens with our hero pondering whether to fulfil his prophesised destiny and assassinate his loyal friend King Duncan. He starts by feeling that it would be worthwhile to commit the murder and 'if it were done when 'tis done then t'were well it were done quickly.' He imagines receiving immediate 'success' with his king Duncan's 'surcease' and would be 'willing to jump the life to come', this is the brave and daring Macbeth that the audience perceived at the start of the play. ...read more.

Through thinking this Macbeth has turned another portion of his mind against the regicide of his holy king. Macbeth now speaks of 'angels trumpet-tongu'd against the deep damnation of [Duncan's] taking off' if the king were to be murdered, the heavens would be in turmoil and the sky would open to reveal cherubs and angels to be saddened by Duncan's death. Shakespearean plays revolve around the temperament of nature, when Macbeth says '...tears shall drown the wind.' He is talking about going against natural causes to kill Duncan, this would indeed be an enormous natural disaster and would have the same catastrophic effect in the play. Macbeth ends his soliloquy saying 'I have no spur to prick the sides of my intent but only vaulting ambition' it could not be more clear that as there is no such spur against Macbeths nobility, as he has already disapproved against his vaulting ambition throughout the course of the soliloquy, that it can only be lady Macbeth who can spur her husband to commit such a 'foul' deed. It is extremely ironic, that Lady Macbeth should enter at the exact moment when Macbeth states to himself that he has no spur; this immediately sets doubt into the audiences mind as to whether Macbeth will be able to stand by his statement. He says to his lady, assertively and with conviction, that 'they will proceed no further in this business' and expects her to succumb to his manly authority; as the Jacobean audience of the time would expect the man of the house to make all the decisions. ...read more.

She refers to her own womanliness and how she would 'pluck'd [her] nipple from [the baby's] boneless gums and dash'd the brains out' this is an extreme use of imagery and it shows what lengths lady Macbeth would go to get her way with her husband. Macbeths is finally broken down to ask the question 'if we should fail?' lady Macbeths manipulations have already worked on her husband and all that is left for her to do is to spur him on and assure him that there will be no failure she lays out an extremely simple plan and even manipulates Macbeth into adding to her ploy and convincing himself entirely that his plan is foolproof. The dialogue between husband and wife ends with strange words of praise from Macbeth; he says 'bring forth men-children only' and this is complimenting on the gritty manliness of his wife. The conversation ends with Macbeth completely satisfied with his wife's plans while moments before this strong-willed character was convinced he had no spur that could change his mind. To conclude, it is doubtless now that there is only one 'spur to prick the sides of Macbeths intent' and this is his wife; there is not other reason stated throughout the play that could have spurred him on to commit such a sin of sacrilegious regicide. Lady Macbeth knows everything about her 'strong-willed' husband to successfully manipulate his decisions and she uses trickery and mockery to spur him into joining her plans. There can surely be no other spur. Bhavin Sodha 10E English coursework ...read more.