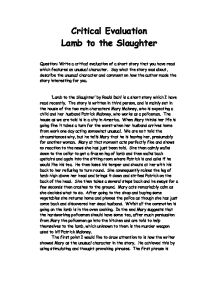 Lamb to the Slaughter Critical Evaluation

Critical Evaluation Lamb to the Slaughter Question: Write a critical evaluation of a short story that you have read which features an unusual character. Say what the story was about, describe the unusual character and comment on how the author made the story interesting for you. 'Lamb to the Slaughter' by Roald Dahl is a short story which I have read recently. The story is written in third person, and is mainly set in the house of the two main characters Mary Maloney, who is expecting a child and her husband Patrick Maloney, who works as a policeman. The house as we are told is in a city in America. When Mary thinks her life is going fine it takes a turn for the worst when her husband arrives home from work one day acting somewhat unusual. We are not told the circumstances why, but he tells Mary that he is leaving her, presumably for another woman. ...read more.

In the end Mary suggests that the hardworking policemen should have some tea, after much persuasion from Mary the policemen go into the kitchen and are told to help themselves to the lamb, which unknown to them is the murder weapon used to kill Patrick Maloney. The first point I would like to draw attention to is how the writer showed Mary as the unusual character in the story. He achieved this by using stimulating and thought provoking phrases. The first phrase is taken from the beginning of the book when the writer described how Mary acted when Patrick had just arrived home from work: "She knew he didn't want to speak much until the first drink was finished, and she, on her side, was content to sit quietly, enjoying his company after the long hours alone in the house." The above example shows that Mary in her own way is quite unusual as it seems that she was so besotted with Patrick that she was content to ...read more.

On the other hand, what about the child? What were the laws about murderers with unborn children? Did they kill them both- mother and child? Or did they wait until the tenth month? What did they do?" The final extract above shows exactly what was going through Marys mind. The bizarre bit is that Mary was obviously very much in love with her husband so the reader asks themselves why did she kill him? The truth is in actual fact that nobody knows the answer except Mary herself. It was as though she was so much in love with Patrick that when he told her he was leaving her it drove her to insanity for a moment when she killed him. Then the moments subsequent to her killing Patrick was when she became somewhat stable again. Mary could have thought to herself well if I cannot have you then no one can but the actual reason nobody knows, it is left for our imagination to decide on. ...read more.

This is a basic analysis that only considers the text at a superficial level and doesn't really appreciate the depth of the characters and how Dahl represents them.
There needs to be more emphasis on the formal analysis of language, structure and form.