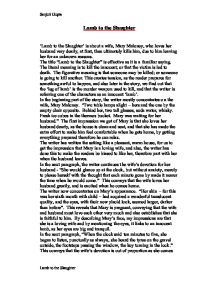 Lamb To The Slaughter Essay

Lamb to the Slaughter 'Lamb to the Slaughter' is about a wife, Mary Maloney, who loves her husband very dearly, at first, then ultimately kills him, due to him leaving her for an unknown reasons. The title "Lamb to the Slaughter" is effective as it is a familiar saying. The literal meaning is to kill the innocent; or that the victim is led to death. The figurative meaning is that someone may be killed; or someone is going to kill another. This creates tension, as the reader prepares for something awful to happen, and also later in the story, we find out that the 'leg of lamb' is the murder weapon used to kill, and that the writer is referring one of the characters as an innocent 'lamb'. In the beginning part of the story, the writer mostly concentrates on the wife, Mary Maloney. "Two table lamps alight - hers and the one by the empty chair opposite. Behind her, two tall glasses, soda water, whisky. Fresh ice cubes in the thermos bucket. Mary was waiting for her husband." The first impression we get of Mary is that she loves her husband dearly, as the house is clean and neat, and that she has made the extra effort to make him feel comfortable when he gets home, by getting everything prepared therefore he can relax. The writer has written the setting like a pleasant, warm house, for us to get the impression that Mary is a loving wife, and also, the writer has done this to make the readers be biased to like her, therefore part with her when the husband leaves. ...read more.

In the next paragraph, the secret is let out. "And he told her... So there it is" It is very clever for the writer to withhold the reason why Mr Maloney is leaving Mary, as this increases tension, because it gives us the reason to speculate; and guess why he is leaving her. Mr Maloney doesn't care for Mary, as he says, "Of course I'll give you money and see that you're looked after. But there needn't really be any fuss. I hope not anyway. It wouldn't be very good for my job." This gives us very negative impressions about Mr Maloney, that he is a cold-hearted, self-centred man; and everything we have been told about Mr Maloney, has made us biased against him to dislike him. In the following page, the writer involves us into Mary's mind, and what she is going through at these points. In the next paragraph, "She herself had imagined the whole thing..." Mary has a typical and realistic reaction to shock, as she tries to reject it all and pretend that nothing ever happened. Mary has a physical reaction to the shock, as she "couldn't feel her feet touching the floor. She couldn't feel anything at all - except a slight nausea and a desire to vomit." The writer establishes that Mary is on 'automatic-pilot', as she seems to be carrying on as normal, as if she was programmed. This builds tension, as we don't know what Mary is going to do next. In the next sentence, the writer increases anticipation by keeping Mary in 'automatic pilot', as she heads "to the cellar, then to the deep freeze and the hand inside the cabinet taking hold of the first object it met. ...read more.

The last two pages, is when the murder weapon is finally disposed of. "You must be terribly hungry by now because it's long past your super time...why don't you eat up that lamb that's in the oven? It'll be cooked just right by now." The writer creates a lot of dramatic irony here, as the policemen and the others eat the lamb without suspecting anything. "Their voices were all think and sloppy full of meat." This is not a very attractive scene of someone eating, and reminds us of animal eating, as they 'belch', etc. The policemen and others start to discuss the weapon. "That's the hell of a big club the guy must've used to hit poor Patrick... that's why it ought to be easy to find." This is very ironic as they are discussing the murder weapon while eating it. The writer builds tension, as the reader feels excited that Mary is going to get away with the murder. Right at the end of the story, comes a twist. "'Probably right under our very noses.' And in the other room, Mary Maloney began to giggle." This is very surprising, as Mary had given an inappropriate reaction. This may be due to that she is giggling with relief that she had got away with it, but personally, I think she is giggling because she has gone mad with the emotions, as she is happy as he is not there to treat her badly, but she is also sad because she loved him very much, and that their baby is going to grow up without a father. ?? ?? ?? ?? Senjuti Gupta Lamb to the Slaughter ...read more.