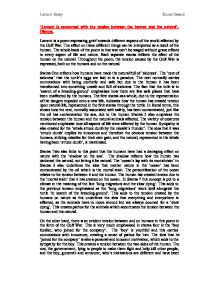 'Lament is concerned with the tension between the human and the natural. Discuss.

'Lament is concerned with the tension between the human and the natural'. Discuss. Lament is a poem expressing grief towards different aspects of the world affected by the Gulf War. The effect on these different things can be interpreted as a result of the human. The whole basis of the poem is that war can't be waged without grave effects to every aspect of life and nature. Each separate stanza reflects the effect of the human on the natural. Throughout the poem, the tension caused by the Gulf War is expressed, both on the humans and on the natural. Stanza One reflects how humans have made the natural full of 'sickness'. The 'nest of sickness' that the turtle's eggs are laid in is a paradox. The nest normally carries connotations with being motherly and safe but due to the human it has been transformed into something unsafe and full of sickness. ...read more.

Stanza Two also links to this point that the humans have had a damaging effect on nature with the 'shadow on the sea'. The shadow reflects how the human has darkened the natural, not letting it be natural. The 'ocean's lap with its mortal stain' in Stanza 3 also underlines the idea that mother nature in the 'ocean' has been contaminated by the oil which is the mortal stain. The personification of the ocean relates to the tension between it and the human. The human has created tension due to the 'mortal stain' that it has created on the ocean. In Stanza 7 this concept is put to a climax in the meaning of the line 'long migrations and the slow dying'. This adds to the previous tension emphasised as the 'long migrations' work well alongside the turtle 'in search of the breeding-ground'. ...read more.

The one, the governement, lying to people to make them fight and help kill other people, and the boy, gunsmith and armourer, who's motivations are different and have been affected by the war, just like nature has been. The personal references create sympathy for the individuals and not what they represent. This is a key effect as it adds to the pathos but seperates the individuals with personal objectives and feelings to the humans behind the war. The duality of those two contrasts of humans resembles the tension between them. The last stanza also brings a climax to the tension on all of the humans. The 'vengence' stresses the revenge of mother nature upon humans. 'The ashes of language' are expressed in a tone underlining the idea that the greates loss of the poem is the loss of humans. This again reimburses the tension on between the human and the human. ...read more.