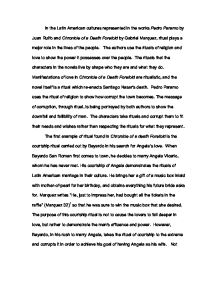 Latin American culture and ritual in the works Pedro Paramo by Juan Rulfo and Chronicle of a Death Foretold by Gabriel Marquez.

In the Latin American cultures represented in the works Pedro Paramo by Juan Rulfo and Chronicle of a Death Foretold by Gabriel Marquez, ritual plays a major role in the lives of the people. The authors use the rituals of religion and love to show the power it possesses over the people. The rituals that the characters in the novels live by shape who they are and what they do. Manifestations of love in Chronicle of a Death Foretold are ritualistic, and the novel itself is a ritual which re-enacts Santiago Nasar's death. Pedro Paramo uses the ritual of religion to show how corrupt the town becomes. The message of corruption, through ritual, is being portrayed by both authors to show the downfall and fallibility of man. The characters take rituals and corrupt them to fit their needs and wishes rather than respecting the rituals for what they represent. The first example of ritual found in Chronicle of a death Foretold is the courtship ritual carried out by Bayardo in his search for Angela's love. When Bayardo San Roman first comes to town, he decides to marry Angela Vicario, whom he has never met. ...read more.

Seeing Angela's devotion, Bayardo decides to return to his lost love. "'Well,' he said, 'here I am...' with almost two thousand letters that she had written him (Marquez 111)." Although the ritual did, in the end, bring about the desired outcome Angela approached the idea of love letters in a corrupt way; only to achieve her ends. Before the ill-fated wedding night Angela despised Bayardo and did not want to marry him, however after being rejected, Angela found some sense of desire for Bayardo. Marquez writes that the letters started off as "fianc�e's notes, then they were little messages from a secret lover,...and lastly they were the indignant letters of an abandoned wife (Marquez 109)." Angela corrupts the idea of a love letter to the level of making it a tool in which she hopes to convince Bayardo to return to her rather then the intimate exchange between partners that it should have been Marquez uses ritualistic practices in his written Latin American culture to develop the themes of Chronicle of a Death foretold, such as the power of money and possessions and the idea of love and devotion. ...read more.

The people become lazy and inconsiderate and stop praying because it does not suit them, which in turn corrupts the town through their lack of prayer and lost souls. "'And your soul? Where do you think it's gone?' 'It's probably wandering like so many others, looking for living people to pray for it (Rulfo 66).'" And therefore the souls stay trapped and wandering in Comalo, the town turns corrupt and the lack of prayer slowly takes religion out of the town until it no longer exists. The rituals expressed in the novels Chronicle of a Death Foretold and Pedro Paramo show the control that religion and love have over the people and their actions. These rituals shape the towns in each book and affect both in a profound way. In Chronicle the town is completely turned around by the rituals observed in love and the rituals shape the actions of the town. Like wise in Pedro Paramo the rituals of religion shape the town's actions, and those actions corrupt the town. The process of corruption starts with the selfishness and laziness of the towns people showing humans fallibility. The End World Literature Assignment 1 Chronicle of a Death Foretold vs. Pedro Paramo: The Corruption of Ritual By Caleb Schnarr Candidate D 0604 123 William J. Palmer High School (0604) May 2004 Colorado Springs, CO USA Word Count-1209 ...read more.