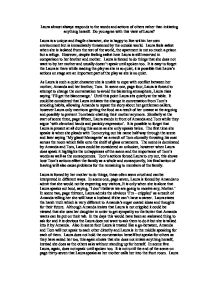 Laura almost always responds to the words and actions of others rather than initiating anything herself. Do you agree with this view of Laura?

Laura almost always responds to the words and actions of others rather than initiating anything herself. Do you agree with this view of Laura? Laura is a unique and fragile character, she is happy to live within her own environment but is immediately threatened by the outside world. Laura feels safest when she is isolated from the rest of the world, the apartment is not so much a prison but a refuge. However, despite feeling safest here Laura is still reserved in comparison to her brother and mother. Laura is forced to do things that she does not want to by her mother and usually doesn't speak until spoken too. It is easy to forget the Laura is there while reading the play as she is so quiet, it is possible that Laura's actions on stage are an important part of the play as she is so quiet. As Laura is such a quiet character she is unable to cope with conflict between her mother, Amanda and her brother, Tom. In scene one, page four, Laura is forced to attempt to change the conversation to avoid the bickering atmosphere, Laura rises saying 'I'll get the blancmange.' Until this point Laura sits quietly at the table. ...read more.

Although Amanda insists that Laura is not crippled it could be viewed that she uses her daughter in order to get sympathy so the butter that Amanda wants can be put on their tab. In the days this would have been an awkward thing to ask for and it is obvious the Laura does not want to ask them to do it but she is talked into it by Amanda. Also in scene four Laura is treated like a go-between, Amanda and Tom will not speak to each other directly and Laura is in the middle speaking for each of them. Laura does not hold the conversation herself but speaks for others as they have asked her too, this again shows that she does not intiate anything herself, instead she does as the others asks without standing up for herself. In scene five Laura, again, does not speak until spoken too. It is not until the end of the scene on page thirty-seven that Laura speaks as her mother calls her into the front room. Laura wishes on the moon because Amanda tells her too, althought she asks her mother what she should wish for, this shows that possibly she is unable to think for herself. ...read more.

Laura's conversation does not flow when she is around her mother, it must be remembered that the play is a memory play and is from Tom's perspective. Tom may be over exaggerating both Amanda and Laura's characters and by doing so he is reminding himself just why he left. While Laura speaks very little at times she is still an important figure to have on the stage as Tom's feeling of guilt is ultimately for leaving his sister. Laura speaks and acts as a result of the actions of Amanda, Tom and Jim. Although she is capable of conversation she does not take part in one until she is comfortable enough to do so with her environment. It is not entirely true that she only speaks when asked to, she shows her concern for her brother and speaks to him easily. She is also influenced to talk when she is not comfortable with the atmosphere, due to the arguing between her brother and mother. The Wingfield's home environment is not the happiest it could be, Laura suffers due to her mother and brother's arguing. Laura is a sensitive character and is affected by her surroundings, it is possible that Laura is happier being an observer than joining in. ...read more.