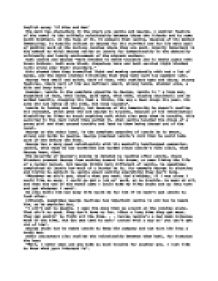 Lennie and George. A central feature of the novel is the unlikely relationship between these two friends and to some point brothers.

English essay 'Of Mice and Men' The main two characters in the story are Lennie and George. A central feature of the novel is the unlikely relationship between these two friends and to some point brothers. On the face of it, it appears that Lennie, because of his mental immaturity, is totally reliant on George for his survival and for his main goal of getting work at the various ranches where they are sent. Equally important is the extent to which George relies on Lennie for companionship in the generally unfriendly and lonely environment of the migrant workers. Both Lennie and George "were dressed in denim trousers and in denim coats with brass buttons. ...read more.

likes to touch anything soft which also gets them in trouble, this occurred in the last ranch they worked in, when Lennie touched the dress of a young girl and that caused trouble and lead to them being chased out of the ranch. George on the other hand, is the complete opposite of Lennie he is smart, strong and talks to people. George promised Lennie's Aunt that he would take care of him before she died. George has a very good relationship with his mentally handicapped companion, Lennie, with whom he has travelled and worked since Lennie's Aunt Clara, whom George knew, died. The majority of George's energy is devoted to looking after Lennie, whose blunders prevent George from working toward his dream, or even living the life of a normal person. ...read more.

I seen the guys that go around on the ranches alone. That ain't no good. They don't have no fun. After a long time they get mean. They get wantin' to fight all the time. . . Course Lennie's a God damn nuisance most of the time, but you get used to goin' around with a guy an' you can't get rid of him". George shows how he needs Lennie to keep him company and not turn him into a nasty man. Other characters also realise the relationship between them both, for instance the boss "Well, I never seen one guy take so much trouble for another guy. I just like to know what your interest is". To conclude George and Lennies relationship is fundamental in the story but can get complex at times. ...read more.