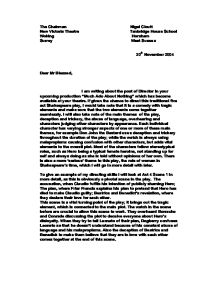 The Chairman Nigel Cloutt New Victoria Theatre Tanbridge House School Woking Horsham Surrey West Sussex 20th November 2004 Dear Mr Blessed, I am writing about the post of Director in your upcoming production "Much Ado About Nothing" which has become available at your theatre. If given the chance to direct this traditional five act Shakespeare play, I would take note that it is a comedy with tragic elements and make sure that the two elements come together seamlessly. I will also take note of the main themes of the play, deception and trickery, the abuse of language, overhearing and characters judging other characters by appearance. Each individual character has varying stronger aspects of one or more of these main themes, for example Don John the Bastard uses deception and trickery throughout the duration of the play; while the watch is always using malapropisms causing confusion with other characters, but adds vital elements to the overall plot. Most of the characters follow stereotypical roles, such as Hero being a typical female heroine, not standing up for self and always doing as she is told without opinions of her own. There is also a more 'serious' theme to this play, the role of woman in Shakespeare's time, which I will go in more detail with later. To give an example of my directing skills I will look at Act 4 Scene 1 in more detail, as this is obviously a pivotal scene in the play. ...read more.

Leonato is furious at this point, as he starts his blank verse speech he should be shouting furiously as he wishes he never had a daughter "... Oh one too much by thee! Why had I one?" but by the time he starts using metaphors and imagery "She has fallen into a pit of ink, that the wide sea hath drops too few to wash her clean again..." there should be a lot more sarcasm in his voice. The rage in Leonato shows that his character is very two dimensional as he is quick to judge Hero and quick to believe Claudio's accusations. When Friar Francis explains his plan the storm has completely gone, and we can hear bird song in the background, and as he continues Leonato's expression slowly changes to one of more sadness than anger. After the plan explanation Benedick shows his point of view for the first time in this scene, "Signor Leonato, let the friar advise you...Yet by mine honour, I will deal in this..." this should be spoken with confidence and he should step in to the group surrounding Hero, as he has been outside the group until now. When Friar Francis, Leonato and Hero exit, leaving Beatrice and Benedick alone the lighting should be full again as it was at the start of the scene. They walk around and talk to each other confessing each other's love for the other "I do love nothing in the world so well as you, is not that strange?" ...read more.

She never stands up for herself, even when she is accused at the wedding she doesn't make any effort to defend her self, to reinforce her stereotyping she even faints at the shock of being accused. In the original Shakespearean play this scene probably would have been staged without lighting or sound effects, the audience would have had to use their imaginations as there would be no backdrops or scenery, and there would be no actresses so men would have to dress up as women. This would have required a lot more skill on the actor's behalf, as the only thing they would have had to aid their character representation would have been costume. The audience should feel tense at the beginning of the scene I directed, as dramatic irony means that they know that Claudio is going to shame Hero, but they don't know how or exactly when. They should feel the anger from Claudio but also the dismay and shock from Hero, Beatrice and Benedick. When the Friar is announcing his plan they should be intrigued to how they will carry out. At the end of the scene Beatrice and Benedick revealing their love to one another should lighten the heavy atmosphere. There sympathy should lie with Hero throughout this scene, and they should hiss when Don John re-enters as they know it was him who set Hero up, again due to dramatic irony. I hope you will consider my application and that this letter will help you in making your choice. Yours sincerely Nigel Cloutt ...read more.