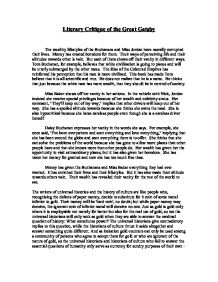 Literary Critique of the Great Gatsby

Literary Critique of the Great Gatsby The wealthy lifestyles of the Buchanans and Miss Jordan have morally corrupted their lives. Money has created boredom for them. Their ways of perceiving life and their altitudes towards other is vain. But each of them shows off their vanity in different ways. Tom Buchanan, for example, believes that white civilization is going to pieces and will be utterly submerged by the other races. The Rise of the Coloured Empires has reinforced his perception that his race is more civilized. This book has made Tom believe that it is all scientific and true. He does not realize that he is a racist. He thinks that just because the white race has more wealth, that they should be in control of society. Miss Baker shows off her vanity in her actions. ...read more.

She has taken her money for granted and now she has too much free time. Money has given the Buchanans and Miss Baker everything they had ever wanted. It has enriched their lives and their lifestyles. But it has also made their altitude towards others vain. Their wealth has revealed their vanity for the rest of the world to see. The writers of universal histories and the history of culture are like people who, recognising the defects of paper money, decide to substitute for it coin of some metal inferior to gold. Their money will be 'hard coin', no doubt; but while paper money may deceive, the ignorant coin of inferior metal will deceive no-one. Just as gold is gold only where it is employable not merely for barter but also for the real use of gold, so too the universal historians will only rank as gold when they are able to answer the cardinal question of history: What constitutes power? ...read more.

In the early days of marriage it had seemed strange to him that his wife should expect him to remember all the items he had undertaken to buy, and he had been taken aback by her serious annoyance when he returned after his first absence, having forgotten everything. But in time he had grown used to this. Knowing that Natasha never asked him to get anything thing for herself, and only gave him commissions for others when he himself volunteered, he now found an unforeseen and childlike pleasure in this purchase of presents for the whole household and never forgot anything. If he incurred Natasha's censure now, it was only for buying and spending too much. To her other defects (as most people thought them but which to Pierre were virtues) of untidiness and neglect of herself Natasha certainly added that of thriftiness. ...read more.