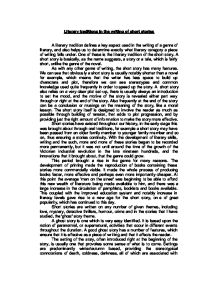 Literary traditions in the writing of short stories

Literary traditions in the writing of short stories A literary tradition defines a key aspect used in the writing of a genre of literary, and also helps us to determine exactly what literary category a piece of writing falls under. One of these is the literary tradition of the short story. A short story is basically, as the name suggests, a story or a tale, which is fairly short, unlike the genre of the novel. As with any other genre of writing, the short story has many features. We can see that obviously a short story is usually notably shorter than a novel for example, which means that the writer has less space to build up characters and plot, therefore we can see stereotypes and common knowledge used quite frequently in order to speed up the story. A short story also relies on a very clear plot set-up, there is usually always an introduction to set the mood, and the motive of the story is revealed either part way through or right at the end of the story. Also frequently at the end of the story can be a conclusion or musings on the meaning of the story, like a moral lesson. The short story itself is designed to involve the reader as much as possible through building of tension, that adds to plot progression, and by providing just the right amount of information to make the story more effective. Short stories have existed throughout our history, in the early stage this was brought about through oral traditions, for example a short story may have been passed from an older family member to younger family member and so on, thus ensuring a stories continuity. With the development of literary skills, writing and the such, more and more of these stories began to be recorded more permanently, but it was not until around the time of the growth of the Victorian industrial revolution in the late nineteen hundreds, and the innovations that it brought about, that the genre could grow. ...read more.

In 'Farthing House', tension is built up, but we are looking back towards the event in question, that which the narrator/main character is beginning to recount whilst writing it down. The fact that she has to write it down and wait so long to do just this makes the reader wonder what could have possibly happened that would had made the woman so nervous and shaken, " I daresay it has made me vulnerable too, that this has brought the events to mind...I began to be restless...in a rush I remembered...I went in a daze... ". The language also used in the description of the surroundings is very rich and appeals a lot to the senses, " a light wind blew suddenly across the grass...I caught the smell of it, that most poignant, melancholy, nostalgic of all smells... ", So that the reader can associate to what it would be like to be there, and this help to evoke a mood of uncertainty and unease within the reader. The characters used in both stories differ in the way in which they are used to contribute to the plot and final outcome. In 'The Red Room' the anonymous sounding title is shown also through the characters, who remain nameless throughout the story and are merely described in great detail by the young man who narrates, " said the man with the withered arm ". The characters in this story are in place to complete the plot, but more importantly to become involved in the symbolism which is predominant throughout. After we have read the entire story we become aware of the poignant theme of fear and the unknown that is present. The 'supernatural' and unknown represent the fear. When the young man comes into the house he is sceptical of the existence of a ghost in the room, though not entirely as he is indeed staying a night in the room to see what happens. ...read more.

". In these quotes we can see that the writer has wrote the ending so that the tension is picked up one last time, an gives an ominous warning about the house, and the eternal struggle between good and evil or fear. It gives the reader something to think about after they have finished reading this book, and how they would have acted in the young mans' situation and also, wondering what the people who look after the house are going to do next. In 'Farthing House', the ending is a more emotive one, where the writer returns to the reason why she remember this story in the first place, which is that of a newspaper article. We are left to think about how the woman felt who had been haunting Farthing House and also given an optimistic note by the narrator to end, " But I imagine that she has gone, now that she has what she was looking for. " I think that as I predicted, these stories did follow the literary traditions set down for short stories and ghost stories, although they both approached it from a different angle, which is more than likely due to the differences in the time periods the separate authors were writing in. I think that they were both effective stories for many reasons. The earlier written story of the two pieces, 'The Red Room', was very effective at representing the symbolism that is associated with fear and ghosts, and provided a lot of tension through use of very descriptive language, that was used to describe the surroundings very well. A good overall moral story for the weakness of the human race. The second newer piece, 'Farthing House', was also an effective piece, and the female writer seemed to make it a more emotional piece, which concentrated more on the mystery of the ghost rather than the fear that it invoked, and also the woe and sense of loss that the ghost felt was very effectively displayed through use of descriptive language and sensory images. ...read more.