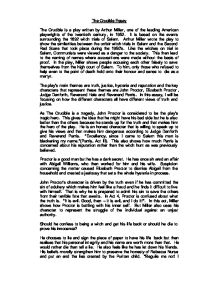 Literature: Essay on 'The Crucible'

The Crucible Essay The Crucible is a play written by Arthur Miller, one of the leading American playwrights of the twentieth century, in 1952. It is based on the events surrounding the 1692 witch trials of Salem. Arthur Miller wrote the play to show the similarities between the unfair witch trials in Salem and the Second Red Scare that took place during the 1950's. Like the witches on trial in Salem, Communists were viewed as a danger to the society. This then lead to the naming of names where accusations were made without the basis of proof. In the play, Miller shows people accusing each other falsely to save themselves from the high court of Salem. To him, only those who refused to help even to the point of death hold onto their honour and sense to die as a martyr. The play's main themes are truth, justice, hysteria and reputation and the key characters that represent these themes are John Proctor, Elizabeth Proctor, Judge Danforth, Reverend Hale and Reverend Parris. In this essay, I will be focusing on how the different characters all have different views of truth and justice. As The Crucible is a tragedy, John Proctor is considered to be the play's tragic hero. This gives the idea that he might have his bad side but he is also better than the others because he stands up for the truth and that makes him the hero of the play. ...read more.

''Whatever you will do, it is a good man does it.'' Elizabeth says that to Proctor to show how deep her love for him is. She supported him all the time and still believes he is a good man even after finding the truth about John's affair. Elizabeth Proctor is the wife of John Proctor and they are both devoted to justice and principles. She is a character that changes dramatically in the audience's perception from a cold bitter woman to a tender loving wife throughout the play. Elizabeth is a model Christian and stays by John even after knowing about his affair with Abigail. She is considered to be one of the most religious person in the play but she lies in the court to protect her husband's reputation and her family. This instantly shows to the audience that she loves her husband very dearly but she also feels that she was the one to push him to infidelity. ''I never knew how I should say my love. It were a cold house I kept!'' She feels guilty about what had happen. Her love and understanding for John is very clear in the last act when she leaves him to make his own decision over whether or not he should confess. She certainly recognises that he will not be able to live with the decision to confess, but she allows him to come to his own realisation of this. ...read more.

Hale experiences a transformation more remarkable than any other character over the course of the play. As he listens to John Proctor and Mary Warren, he is convinced that they are telling the truth and that Abigail is lying. But then he realises that the trials are no longer in his hands but rather in those of the theocracy. He then comes to accept the horror of what he actually started and face the consequences. Towards the end of the play, he returns back to Salem a desperate man. He pleads with the accused asking them to lie to save their lives as he feels guilty and responsible for their fates. ''There is blood on my head!'' He has seen the truth but too late and he has also lost faith in the law. He works tirelessly to try and out things right but it is an impossible task. Miller uses Reverend Hale as a dramatic device to portray the tragedy. Hale does not really gets the audience's respect as he insists upon surrender rather than standing up for what you believe in. Rebecca Nurse is used in the play to influence the characters. She was the one that changed John's decision as she stands up for what she believes in. She is one of Salem's most noble and respected person and a true representation of the truth. Rebecca Nurse is the clear martyr in the play as she was the purest character hanged for witchery. ...read more.