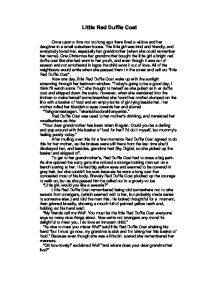 Little Red Duffle Coat Once upon a time not too long ago there lived a widow and her daughter in a small suburban house. The little girl was kind and friendly, and everybody loved her, especially her grandmother (when she could remember her name). One Christmas her grandmother bought the little girl a bright red duffle coat like she had worn in her youth, and even though it was out of season and not smothered in logos the child wore it out of love. All of the neighbours would smile when she passed them in the street and call out "little Red Duffle Coat". Now one day, little Red Duffle Coat woke up with the sunlight streaming through her bedroom window. "Today's going to be a good day, I think I'll watch some TV," she thought to herself as she pulled on her duffle coat and skipped down the stairs. However, when she wandered into the kitchen to make herself some breakfast she found her mother slumped on the lino with a basket of food and an empty bottle of gin lying beside her. Her mother rolled her bloodshot eyes towards her and slurred "Yehgramasicegen. Tekerissfoodorahltanyeride." Red Duffle Coat was used to her mother's drinking, and translated her vocalisations as this: "Your dear grandmother has been taken ill again. Could you be a darling and pop around with this basket of food for her? I'd do it myself, but mummy's feeling poorly today." After mulling over this for a few moments Red Duffle Coat agreed to do this for her mother, as the bruises were still ...read more.

As soon as the scene was as safe as he wanted he turned back to grandma. "If you make a sound, or try anything I'll cut you." He told her in a very matter-of-fact way. "Do you understand?" Grandma nodded timidly and dabbed at the blood flowing from her nose. "Good, get up." He told her, which she promptly did. "Do you have a cellar?" "Y..yes, wh..wh..what do yu..you want?" "Your lovely granddaughter, but I can warm up on you whilst we wait" Wolf said licking his lips "We're going to have so much fun once she gets here..." As soon as Red Duffle Coat had picked a big enough bunch of geraniums she set off for her grandmother's house. "Won't grandma be pleased to see me?" she thought to herself as she knocked on the door. But the man who answered the door was definitely not her grandmother, despite the floral nightgown, fluffy slippers and pink hairnet he wore. "Hello dearie," Wolf croaked, "Do come in." "You're not my grandma," Asked Red Duffle Coat nervously. "Where is she?" "There's no fooling you is there?" said Wolf with a sigh "Kids today have no sense of tradition." With that he grabbed Red Duffle Coat's arm and dragged her in, clamping a hand over her mouth to stifle her screams. He threw her to the floor and locked the door. "You're all mine now honey, not a sound or I'll gut you like a fish" he snarled, producing a vicious looking knife nonchalantly. ...read more.

As soon as she'd finished retching Red Riding Hood looked back on her victim, or what was left of him. His head looked like a pumpkin run over by a truck, pieces of it littered the floor, clung to the walls, dripped from the ceiling. Her muscles gave out, and she sank to her knees among the carnage and sobbed. Movement to her left brought her out of her reverie, and turning her head she looked in revulsion. A small piece of Wolf's skull with an ear still clinging to it like a barnacle stuck to a shipwreck was changing. The hair darkened and thickened, and the ear itself began to taper and deepen, until she was staring at a very canine ear, still slick with blood from its former owner. Feeling the bile rise in her throat, Red Duffle Coat gagged and vomited neatly into her lap, and passed out. * * * May 14th 19__ : Feeling much better, but they still won't let me go. I've been here 4 weeks now, and still they carry out their tests. I just want to go home, I want to run beneath the stars and howl at the moon, to be with my own kind. Now Wolf is dead and has passed on his cursed bite, I am the Alpha female. I hear my brothers and sisters calling to me every night. The moon will be full tomorrow, I can feel it. Tomorrow. I'll do it then. ...read more.