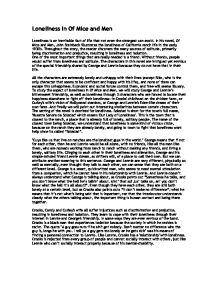 Loneliness In Of Mice and Men

Loneliness In Of Mice and Men Loneliness is an inevitable fact of life that not even the strongest can avoid. In his novel, Of Mice and Men, John Steinbeck illustrates the loneliness of California ranch life in the early 1930's. Throughout the story, the reader discovers the many sources of solitude, primarily being discrimination and prejudice, resulting in loneliness and isolation. One of the most important things that are really needed is a friend. Without friends, people would suffer from loneliness and solitude. The characters in this novel are intrigued yet envious of the special friendship shared by George and Lennie because they do not have that in their life. All the characters are extremely lonely and unhappy with their lives (except Slim, who is the only character that seems to be confident and happy with his life), and none of them can escape this unhappiness. Economic and social forces control them, and free will seems illusory. To study the aspect of loneliness in Of Mice and Men, we will study George and Lennie's bittersweet friendship, as well as loneliness through 3 characters who are forced to locate their happiness elsewhere to fight off their loneliness--in Crooks' childhood on the chicken farm, or Curley's wife's vision of Hollywood stardom, or George and Lennie's Eden-like dream of their own farm. And finally we will point out interesting similarities between certain characters. The setting of the novel is destined for loneliness. Soledad is short for the town's full name, 'Nuestra Senora de Soledad' which means 'Our Lady of Loneliness'. This is the town that is closest to the ranch, a place that is already full of lonely, solitary people. The name of the closest town being Soledad, we understand that loneliness is some kind of vicious circle, because on the ranch they are already lonely, and going to town to fight that loneliness wont help since its called "Soledad". ...read more.

When they find it, they are the happiest people. The only downside to finding a friend is what happens when one of the friends is lost. This causes even more misery in the remaining friend, and forces the friend to start searching again, which is a hard process, because the person has taken the habit of his friend and being comfortable in his relationship, and opening towards others is harder. One of the most important lessons we learn in Of Mice and Men is that Friendship and human interaction are two very valuable things, and that having them is as much as a right as it is a privilege, that we much treasure as it keeps us away from loneliness. George and Lennie - A friendship " Of Mice and Men " by John Steinbeck is a novel involving two extremely different main characters. George is a reasonably intelligent, hardworking ranchman. Lennie on the other hand always manages to find trouble. He is equally as hardworking and honest as George but his simple childlike mind always finds him trouble wherever he goes. However they have one thing that unites the two of them as close as any bond can. This is that they both share the same dream of owning their own ranch - and after many hard working years, moving from ranch to ranch, living in complete poverty and working for next to nothing they finally try to achieve this life long dream. I enjoyed this novel because I found the contrast between the two main characters very interesting and wanted to try to understand why Steinbeck has chosen main characters such as George and Lennie, as the rest of the book was mainly molded around these two specific characters. I was very involved with most aspects of the book particularly that of the setting. However I have decided my task will be to focus on the themes of friendship and loneliness. ...read more.

George is "small and quick, dark of face, with restless eyes and sharp, strong features." Lennie is "his opposite, a huge man, shapeless of face, with large, pale eyes, with wide, sloping shoulders." They have just... 4. Idealism vs. Reality Of Mice and Men tells the story of two simple men who try to escape homelessness, economic poverty, and emotional and psychological corruption. Otherwise, the fate of those who do not abandon the lives they lead as itinerant workers is bleak and dehumanizing. As George tells Slim, the mule driver "I seen the guys that go around on the ranches alone. That ain't no good. They don't have no fun. After a long time they get mean." George and Lennie dream of owning a farm, but by the end of the novel the dream has failed. Their plan is doomed because... 5. John Steinbeck's Of Mice and Men is a powerful and vivid depiction of life in rural America. It recounts the tragic story of George Milton and Lennie Small, two lonely itinerant farm workers who belonged nowhere and to no one but themselves. George has accepted the burden of protecting the mentally incompetent but uncommonly strong Lennie from the thefts and tricks of both ranch bosses and other hands, but, in so doing, George has considerably reduced the possibilities of his own successful attainment of independence and peace. In order to placate his childishly effusive... 6. The relationship between the intelligent but weak George Milton and the retarded but strong Lennie Small is the focal point of Steinbeck's novella, and a surface reading strongly suggests that "friendship" or "personal commitment" is one of this work's salient themes. As the half-witted Lennie dutifully intones, the two men are distinguished from all of the other characters in the story "because I got you to look after me, and you got me to look after you, and that's why." (p.15). The initial interview by the ranch boss underscores the unusual quality of this bond, and the jerk line skinner... ...read more.