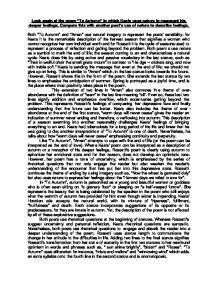 Look again at the poem To Autumn in which Keats uses nature to represent his deeper feelings. Compare this with another poet(TM)s use of nature to describe feelings.

Look again at the poem "To Autumn" in which Keats uses nature to represent his deeper feelings. Compare this with another poet's use of nature to describe feelings. Both "To Autumn" and "Amen" use natural imagery to represent the poets' sensibility: for Keats it is the remarkable description of the harvest season that signifies a woman who cannot recognize her own individual worth and for Rossetti it is the cycle of seasons used to represent a process of reflection and getting beyond the problem. Both poems use nature as a symbol to mark the end of life; the season coming to an end characterizes a natural cycle. Keats does this by using active and passive vocabulary in the last stanza, such as "Then in wailful choir the small gnats mourn" in contrast to "Hedge - crickets sing, and now with treble soft." Keats is sending the message that even at the end of life; we should not give up on living. ...read more.

Keats had tuberculosis for a long period of his life and knew that he was going to die; another interpretation of "To Autumn" is one of death. Nevertheless, he talks about how "warm days will never cease" emphasising continuity and perpetuity. Like "To Autumn", "Amen" attempts to cope with the end of life (or the poem can be interpreted as the end of love). Where Keats' poem can be interpreted as a description of autumn or a metaphor of his deeper feelings, Rossetti's poem is clearly using autumn to epitomize her emotional state and for that reason, does not develop an optimistic tone. However, her poem has a tone of uncertainty, which is emphasised by the series of rhetorical questions that not only engage the reader but also weaken the reader's understanding of the encounter that has put her into this depressive state. Rossetti continues the theme of ending by using imagery such as, "Now the wheat is garnered duly" but also uses nature to express her feelings about the "Harvest days we toiled to sow for". ...read more.

"To Autumn" uses alliteration for instance, "mists and mellow" and "winnowing wind" which adds an extra syllable onto the fourth line in the second stanza and is onomatopoeic. These uses of alliteration engage the reader and also include all of the reader's senses within the poem. The imagery captivates a reader's mind; therefore they are seeing the image in their head. The onomatopoeia and alliteration enthrals a reader's hearing and the vivid description of the season has the same effect on the sense of touch and feeling. To connect the last two lines to the rest of the last stanza, Rossetti uses the word "And" which signifies addition and consequently, addition. This emphasises her want for a average and natural life in which she feels positive and joyful whereas the last line in "To Autumn", "And gathering swallows twitter in the skies" is an understated sense of predictable loss which makes it an accepted summation of the entire human condition. ...read more.