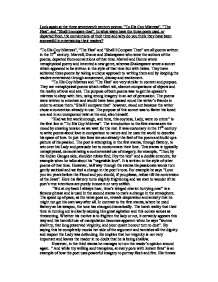 Look again at the three seventeenth century poems, &quot;To His Coy Mistress&quot;, &quot;The Flea&quot;, and &quot;Shall I compare thee&quot;. In what ways have the three poets used, or departed from, the conventions of their time and why do you think they have been successful in ...

Look again at the three seventeenth century poems, "To His Coy Mistress", "The Flea", and "Shall I compare thee". In what ways have the three poets used, or departed from, the conventions of their time and why do you think they have been successful in entertaining their readers? "To His Coy Mistress", "The Flea" and "Shall I Compare Thee" are all poems written in the 17th century. Marvell, Donne and Shakespeare who were the authors of the poems, departed from conventions of that time. Marvel and Donne wrote metaphysical poetry and invented a new genre, whereas Shakespeare wrote a sonnet which appeared to be written in the style of that time but with twists. They have achieved these poems by taking a unique approach to writing them and by keeping the readers entertained through amusement, dismay and excitement. "To His Coy Mistress and "The Flea" are very similar in context and purpose. They are metaphysical poems which reflect wit, obscure comparisons of objects and the reality of love and sex. The purpose of both poems was to get the speaker's mistress to sleep with him, using strong imagery in an act of persuasion. ...read more.

However, in the third stanza he manages to turn the reader's opinion around again. "And while thy willing soul transpires, at every pore with instant fires" is an example of how the poet uses powerful imagery to portray flesh and fire. His threats have now turned into encouragement and he uses a positive approach to woo his Lady. The poet uses imperative tenses to reflect this, for example when he says, "Now let us sport while we may, and now like amorous birds of prey", he builds up a sense of urgency and passion once more and we can feel the love he is in inflicting again. The last of the rhyming couplets is left with open words. We are left wondering if the Lady will give into his wishes or not. The positive words used in the last few lines hint gently that the poet has won the argument, but nothing is made certain. The characteristics used in "The Flea" are typical of metaphysical poetry. The writer uses conceits, arguments and obscure technology to persuade his mistress to sleep with him by overcoming her argument. ...read more.

because this poem will be famous so the beloved will be alive in every readers mind when he says "When in eternall lines to time thou grow'st, so long as men can breathe or eyes can see, so long lives this, and this gives life to thee". This changes the feel of the poem. Although the love is still there, we sense a different awareness to the poet from the loving and affectionate one we once felt. He comes across proud and slightly arrogant about his work, and puts a different slant on what was once a conventional love poem. In conclusion I think the 17th day reaction would have been entertaining and funny and therefore quite different to the reaction I would expect now. People today would find the poetry quite shocking and distasteful and they would not be considered politically correct. "To His Coy Mistress" is successful because it is entertaining, wheras "The Flea" is successful because it's fascinating and slightly confusing at times. "Shall I compare thee" however is totally different because it has departed from it and the overall result was very successful. The poet went from delighting the audience then to twisting their opinions of him keeping them entertained. ...read more.