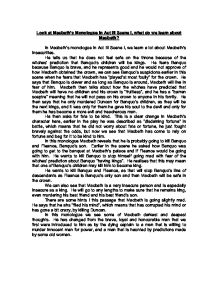 Look at Macbeth&amp;#146;s Monologue in Act III Scene I, what do we learn about Macbeth?

Look at Macbeth's Monologue in Act III Scene I, what do we learn about Macbeth? In Macbeth's monologue in Act III Scene I, we learn a lot about Macbeth's insecurities. He tells us that he does not feel safe on the throne because of the witches' prediction that Banquo's children will be kings. He fears Banquo because Banquo is brave, and he represents good and he would not approve of how Macbeth obtained the crown, we can see Banquo's suspicions earlier in this scene when he fears that Macbeth has "played'st most foully" for the crown. He says that Banquo is clever and as long as Banquo is around, Macbeth will live in fear of him. ...read more.

He then asks for fate to be kind. This is a clear change in Macbeth's character here, earlier in the play he was described as "disdaining fortune" in battle, which means that he did not worry about fate or fortune, he just fought bravely against the odds, but now we see that Macbeth has come to rely on fortune and beg for it to be kind to him. In this monologue Macbeth reveals that he is probably going to kill Banquo and Fleance, Banquo's son. Earlier in the scene he asked how Banquo was going to get to the banquet at Macbeth's palace and if Fleance would be going with him. ...read more.

We can also see that Macbeth is a very insecure person and is especially insecure as a king. He will go to any lengths to make sure that he remains king, even murdering his best friend and his best friend's son. There are some hints I this passage that Macbeth is going slightly mad. He says that he ahs "filed his mind", which means that has corrupted his mind or has gone a bit crazy, by killing Duncan. In this monologue we see some of Macbeth darkest and deepest thoughts. He has changed from the brave, loyal and honourable man that we first were introduced to him as by the dying captain to a man that is willing to murder innocent men for power, and a man that is haunted by predictions made by some old women. ...read more.

Although some good observations are being made here the explanations are too superficial and therefore the whole response is too short.
Language needs to be looked at on a number of levels -word, sentence and text - to show an understanding of Shakespeare's choices.