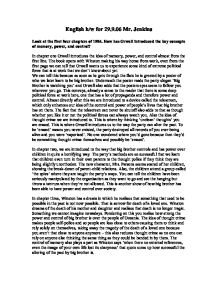 Look at the first four chapters of 1984. How has Orwell introduced the key concepts of memory, power, and control?

English h/w for 29.9.06 Mr. Jenkins Look at the first four chapters of 1984. How has Orwell introduced the key concepts of memory, power, and control? In chapter one Orwell introduces the idea of memory, power, and control almost from the first line. The book opens with Winston making his way home from work, even from the first page we can tell that Orwell wants us to experience some kind of extreme political force that is at work that we don't know about yet. We can tell this because as soon as he gets through the flats he is greeted by a poster of who we later learn to be big brother. Underneath the poster reads the party slogan 'Big Brother is watching you' and Orwell also adds that the posters eyes seem to follow you wherever you go. ...read more.

Also the idea of thought crime we are introduced to. This is where by thinking 'unclean' thoughts' you are erased. This is where Orwell introduces us to the way the party can alter the past. To be 'erased' means you never existed, the party destroyed all records of you ever being alive and you were 'vaporised'. No one wondered where you'd gone because then they'd be committing thought crime themselves and possibly be 'erased'. In chapter two, we are introduced to the way that big brother controls and has power over children in quite a horrifying way. The party's methods are so successful that we learn that children even turn in their own parents to the thought police if they think they are being slightly unorthodox. ...read more.

In chapter three, Winston has a dream in which he realises that something that used to be possible in the past is not now possible. That is sorrow for death of a loved one. Winston dreams of the death of his mother and daughter and realises that death is no longer tragic. Something we cannot imagine nowadays. Pondering on this you realise how strong the power and control of big brother is over the people of Oceania. The idea of thought crime makes people self-police and so people are less close to others causing them to think and rely solely on themselves, taking away the tragedy of the death of a loved one because you aren't that close to anyone anymore - this also reduces thought crime as no one can rely on anyone else thinking the same thing as they could be handed in by them. ...read more.

This response is in receipt of a question that asks candidates how Orwell shows The Party's totalitarian political and social regime in 'Nineteen Eighty-Four' to control memories and sustain their power and control over the people of Oceania. The answer ...

This response is in receipt of a question that asks candidates how Orwell shows The Party's totalitarian political and social regime in 'Nineteen Eighty-Four' to control memories and sustain their power and control over the people of Oceania. The answer is very well-structured, discussing a chapter per paragraph, and there are number of the methods Orwell's uses to manipulate power and control. It would be encouraged though, that a better conclusion is provided, as there does not seems to be a sufficient conclusion to round off such a well-informed essay and this, this is the only thing preventing the candidate from achieving the top band of marks. Conclusions must draw upon all the exploration discussed earlier in the essay and make a conclusive statement; they must not introduced any new ideas and because this candidate final paragrpah is the one in which they analyse Chapter 4, this is not considered a proper conclusion.

The Level of Analysis here, though systematic, covers everything the question asks of them. They consider a number of Orwell's techniques to convey The Party's control over the people of Oceania, which specific attention to detail with regards to how Winston Smith acts as a voice of just one of the many Inner party members that The Party controlling. I also like the evidence drawn from the source text as it shows a good understanding of the events of each of the four first chapters; this shows examiners that there is a sound comprehension and attention of the details of the plot and how The Party's dystopian cruelty is filtered to the reader in each one.
What could be improved though, is the amount of direct linking to the source text via quotes. Quotes are an extremely important part of analytical essay writing as they show proof that the candidate reailses what they're saying can be backed up by the text they are studying, and it also shows a knowledge of the section from which the quotes are sourced. So it ias a shame to see very few quotes taken form the source text in this answer - I would encourage that the candidate looks at their answer and highlights, where possible, sections where a quote from the novel could replace a few words as this shows direct integration (embedded quotes) of the source text into the essay.

The Quality of Written Communication (QWC) here is average. There is a sound handling of the English language that is entirely respresentative of what is expected from a GCSE English candidate. There is a good use of a range of vocabulary and almost no spelling errors; there are no errors that compromise the meaning of the essay. It would however be prudent, to achieve the highest band of marks, to read and re-read the answer before closing the exam booklet/submitting the final draft of coursework to iron out any final errors in QWC.