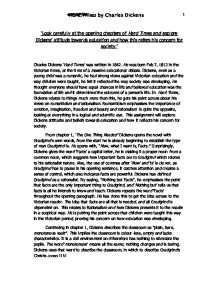 Look carefully at the opening chapters of Hard Times and explore Dickens attitude towards education and how this refers his concern for society.

'Look carefully at the opening chapters of Hard Times and explore Dickens' attitude towards education and how this refers his concern for society.' Charles Dickens 'Hard Times' was written in 1842. He was born Feb 7, 1812 in the Victorian times, at the time of a massive educational debate. Dickens, even as a young child was a romantic, he had strong views against Victorian education and the way children were taught, he felt it reflected the way society was developing. He thought everyone should have equal chances in life and believed education was the foundation of life and it determined the outcome of a person's life. In Hard Times, Dickens relates to things much more than this, he gets his point across about his views on romanticism and rationalism. Romanticism emphasises the importance of emotion, imagination, freedom and beauty and rationalism is quite the opposite, looking at everything in a logical and scientific eye. This assignment will explore Dickens attitudes and beliefs towards education and how it reflects his concern for society. From chapter 1, 'The One Thing Needed' Dickens opens the novel with Gradgrind's own words, from the start he is already beginning to establish the type of man Gradgrind is. He opens with, "Now, what I want is, Facts." Surprisingly, Dickens gives the word 'Facts' a capital letter, he is making it a proper noun from a common noun, which suggests how important facts are to Gradgrind which relates to his rationalist nature. Also, the use of commas after 'Now' and 'is' is clever, as Gradgrind has to pause in his opening sentence, it catches attention and creates a sense of control, which also indicates facts are powerful. Dickens has defined Gradgrind as a rationalist. By saying, "Nothing but Facts", he emphasises the point that facts are the only important thing to Gradgrind, and 'Nothing but' tells us that facts is all he intends to know and teach. ...read more.

Dickens smartly uses the name 'Thomas Gradgrind' as it is playing on words. 'Gradgrind' suggests the grinding down of all children, and that is what he is doing, grinding them down to a point where all liveliness is sucked out of them. Dickens has used this name as he wants to give rationalism a negative image, and using the name Gradgrind gives Gradgrind a negative outcome. Dickens is characterising Gradgrind as a rationalist before he introduces him as a person. He does this as he wants the reader to know how Gradgrind's mind works as a rationalist, and how it symbolises him as a grim character. Continuing in chapter 2, Dickens uses the metaphor "He seemed a kind of cannon loaded to the muzzle with facts, and prepared to blow them clean out of the regions of childhood". Cunningly, by saying this Dickens is expressing that Gradgrind is firing facts at the pupils as he uses the word 'cannon'. Cannons fire and destroy things, and Dickens has smartly included this word as he is implying that Gradgrind is destructive and destroying the pupils with facts. Also, he says "blow them clean out of the regions of childhood" which suggests Gradgrind intends to blow the pupils from childhood to adulthood. Dickens describes Gradgrind like this as he wants the reader to know how rationalist behaviour affects teaching. It exposes Dickens concerns over society and the way children were taught and indicates Dickens has strong feelings against rationalism and educational methods of teaching in the Victorian Period. "He seemed a galvanising apparatus, too, charged with a grim mechanical substitute for the tender young imaginations that were to be stormed away." Dickens uses these words in chapter 2; he is trying to explain that Gradgrind is turning the pupils into machines. By saying 'galvanising apparatus', Dickens is implying that Gradgrind is strengthening the pupils into an object. ...read more.

Dickens writes in his novel, "If he had only learnt a little less, how infinitely better he might have taught much more!" He says this as he is suggesting that if M'Choakumchild wasn't brought up to be a rationalist, and didn't learn anything but facts, he would have known the children as a people and not as a machine. Dickens is implying that rationalism has affected the way Gradgrind and M'Choakumchild teach the children, he believes if they weren't too interested in teaching facts, they would have known the children's real personality and expressed their feelings. Dickens does this as he wants to show the Victorian reader that if romanticism replaced rationalism, in effect, it would have shown a greater relationship between the pupils and the teachers. Dickens has shown rationalism turns people into machines, and he wants to let the reader know that rationalism affects the pupils' minds which shows his concerns over the industrial revolution and educational systems. In factories people were being replaced by machines and Dickens extends this as part of the educational system. In the final chapter of the novel, Dickens theories over rationalism and romanticism are proven. Dickens throughout the novel has talked about how rationalism doesn't work because no feelings and compassion are involved. He has proven this as he asks Bitzer if he has a heart, and he replies, "The circulation Sir... couldn't be carried without one". Bitzer smugly replies this way as he is firing the facts straight back at Gradgrind. After years of being educated in a rationalist manner, Bitzer simply replies with a rationalist fact-full comment. Bitzer does not have a heart; rationalism has made him half a person with no compassion or feelings. Gradgrind's rationalist teachings have backfired; he is reaping what he has sown and therefore Dickens has proven he was correct about rationalism, it does not work. ?? ?? ?? ?? 1 Hard Times by Charles Dickens Christie Jones 11B1 ...read more.