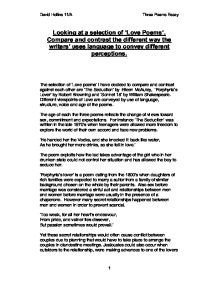 Looking at a selection of 'Love Poems'. Compare and contrast the different way the writers' uses language to convey different perceptions.

Looking at a selection of 'Love Poems'. Compare and contrast the different way the writers' uses language to convey different perceptions. The selection of 'Love poems' I have decided to compare and contrast against each other are 'The Seduction' by Eileen McAuley, 'Porphyria's Lover' by Robert Browning and 'Sonnet 18' by William Shakespeare. Different viewpoints of Love are conveyed by use of language, structure, voice and age of the poems. The age of each the three poems reflects the change of views toward sex, commitment and expectations. For instance 'The Seduction' was written in the late 1970's when teenagers were allowed more freedom to explore the world of their own accord and face new problems. 'He handed her the Vodka, and she knocked it back like water, As he brought her more drinks, so she fell in love.' ...read more.

Jealousies could also occur when outsiders to the relationship, were making advances to one of the lovers and be known to the person making the advances that the intended person of their affections was already in a relationship. 'Sonnet 18' was written in the 1500's and is a timeless poem about young love and about a person exploring the standards of beauty of his friend. 'Shall I compare thee to a summer's day?' The beauty of this friend according to the voice will never fade due to his everlasting memory of her in the poem. As in 'Porphyria's Lover', and 'Sonnet 18' unlike 'The Seduction' there is a clear feeling of devotion to their lover who they deeply care for their lover compared to the sex driven relationship of 'The Seduction' Also the way language has changed over the years in 'Sonnet 18' and 'Porphyria's Lover', there is more difficultly in understanding the language used. ...read more.

'Porphria's Lover' starts with similar dingy settings such as 'The sullen wind was soon awake. Yet unlike 'The Seduction' the mood of the outdoors is quickly ignored when Porphyria walks in and provides an air of excitement to the rather dull lingering atmosphere of things before her presence. 'She shut the cold out and the storm, Blaze up and the entire cottage warm.' A similar noticeable feeling of happiness is felt toward the characters deep love towards the newfound companion within 'Sonnet 18'. 'Sometime too hot the eye of heaven shines.' The different poems have different voice, which allows an insight to the intimacy of the relationship and also trust within the relationship. For instance 'Sonnet 18' uses the random thoughts of persons whereas 'The Seduction' is told all by the girl whom became pregnant through a one night stand. David Hollins 11/A Three Poems Essay 1 ...read more.