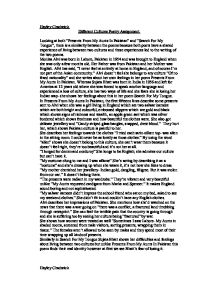 Looking at both &quot;Presents From My Aunts In Pakistan&quot; and &quot;Search For My Tongue&quot;, there is a similarity between the poems because both poets have a shared experience of living between two cultures and these experiences led to the writing of the two poems.

Hayley Chadwick. Different Cultures Poetry Assignment. Looking at both "Presents From My Aunts In Pakistan" and "Search For My Tongue", there is a similarity between the poems because both poets have a shared experience of living between two cultures and these experiences led to the writing of the two poems. Moniza Alvi was born in Lahore, Pakistan in 1954 and was brought to England when she was only a few months old. Her Father was from Pakistan and her Mother was English. Alvi has said, "I never feel at entirely at home in England, and of course I'm not part of the Asian community." Alvi doesn't feel she belongs to any culture "Of no fixed nationality" and she writes about her own feelings in her poem Presents From My Aunts In Pakistan. Whereas Sujata Bhatt was born in India in 1956 and left for America at 12 years old where she was forced to speak another language and experienced a loss of culture, she has two ways of life and she fears she is losing her Indian way- she shows her feelings about this in her poem Search For My Tongue. In Presents From My Aunts In Pakistan, the first fifteens lines describe some presents sent to Alvi when she was a girl living in England which ...read more.

The lines in the poem break up suggesting that she's seeing herself in different places. She remembers her journey to England ".... Recall the story how the three of us sailed to England. Prickly heat had me screaming on the way." The weather was far too hot in Pakistan than it is here. "I ended up in a cot in my English Grandmothers dining room, found myself along playing with a tin boat." This shows she was separated and left isolated- it's as if her Grandmother didn't improve of her because she doesn't belong and the tin boat shows it's hard and not a baby toy- she doesn't get treated the same because of her culture. There was great poverty in Pakistan "or there were beggars, sweeper- girls and I was there- of no fixed nationality, staring through fretwork at the Shalimar gardens." She doesn't belong and there's a barrier stopping her so she's looking in from the outside of it. Moniza Alvi feels confused and strange about being involved in two different cultures. She doesn't know where she belongs and who she is and by the use of her language she shows great sadness of not being able to find herself. ...read more.

The tone of the poem at first is in contrast to Presents From My Aunts In Pakistan because she shows her sadness and resentment that she's losing her mother tongue and finds it difficult sharing between two cultures because it's hard to find her real identity but unlike Alvi's poem, Bhatt finds her identity and shows her happiness and joy that her first culture is still within her and feels proud of her Indian culture whereas in Alvi's poem she never feels happiness because she can't find her real belonging. I thoroughly enjoyed both poems and felt their feelings about just how difficult it is living between both cultures however I think Alvi's poem had the most effect on me as a reader because she made an impression of both cultures and because she never felt any happiness it made me feel sorry for her by the use of language and the jerky structure she used to show the unhappiness she felt however I thought that Bhatt's structure was also really good how she separated the English with the Gujerati- I think they're both enjoyable poems with a real meaning to them which I found great to read. Hayley Chadwick ...read more.