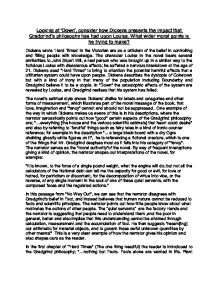 Looking at 'Down', consider how Dickens presents the impact that Gradgrind's philosophy has had upon Louisa. What wider moral points is he trying to make?

Looking at 'Down', consider how Dickens presents the impact that Gradgrind's philosophy has had upon Louisa. What wider moral points is he trying to make? Dickens wrote 'Hard Times' in the Victorian era as a criticism of the belief in controlling and filling people with knowledge. The character Louisa in the novel bears several similarities to John Stuart Mill, a real person who was brought up in a similar way to the ficticious Louisa with disasterous effects; he suffered a nervous breakdown at the age of 21. Dickens used "Hard Times" to bring to attention the potential harmful effects that a utilitarian system could have upon people. Dickens describes the dystopia of Coketown but with a kind of irony in that many of the population including Bounderby and Gradgrind believe it to be a utopia. In "Down" the catastophic effects of the system are revealed by Louisa, and Gradgrind realises that his syatem has failed. The novel's satirical style shows Dickens' dislike for labels and categories and other forms of measurement, which illustrates part of the moral message of the book, that love, imagination and "fancy" cannot and should not be suppressed. One example of the way in which Dickens makes us aware of this is in his descriptions, where the narrator sarcastically points out how "good" certain aspects of the Gradgrind philosophy are; "...everything [the house and the various scientific cabinets] that heart could desire" and also by referring to 'fanciful' things such as fairy tales in a kind of ironic counter reference; for example in the description "... a large black board with a dry Ogre chalking ghastly white figures on it", he is referencing a fictional creature, which is one of the things that Mr. ...read more.

life, which her mother realised just before she died; "...there is something - not an ology at all - that your father has missed..." This something is all the things that Mrs. Gradgrind saw in Sissy; love, fancy, emotions, imagination. In "Down" Louisa confronts her father about this. "How could you give me life, and take from me all the inappreciable things that raise it from the state of conscious death? Where are the graces of my soul? Where are the sentiments of my heart?..." In this passage, Louisa lets out everything that she has wanted to ask her father, yet before had never done so. The pauses in her speech make it seem dramitic and hard hitting. Dickens' use of the repition of questioning words such as how and where in short sentances make it clear that this is a lot of things that Louisa is desperate to know, as they come in a kind of frenzied outburst, like the fire that "bursts out" of the Coketown chimneys. During her talk with her Father about marrying Mr.Bounderby, she is staring at the chimneys of Coketown and says" There seems to be nothing there but languid and monotonous smoke. Yet when the night comes, Fire bursts out Father!" Louisa's emotions have been suffocated, but when something will come to "ignite" them (as Harthouse does with Tom's help in Book 2) she is worried that the fire of her imagination will burst out, just as it does in the chimneys of Coketown. This worry proves to be justified. This image of Louisa's imagination as a fire is repeated often throughout the novel, for example in Chapter 8 "[Louisa] now looking at the bright sparks as they dropped upon the hearth" and in Chapter 14 when Tom comes to inform her of the fact that Mr. ...read more.

This is also another example of the good morals that Gradgrind is trying to promote, in that Louisa resists temptation and does what is right. Finally at the end of "Down", when Louisa is close to collapse, her father tries to support her, but she says "I shall die if you hold me! Let me fall upon the ground!" Louisa needs to fall upon the ground because she has to learn how to deal with things by herself, which she has previously not been able to do. This is the result of Louisa's "cursed life" and her "Gradgrind upbringing"; she is incapable of dealing with her emotions. Mr. Gradgrind "saw the pride of his heart and the triumph of his system, lying, an insensible heap, at his feet." Louisa, to him, at this moment shows the failure of his system, and everything he has worked for. However, later in the novel, Mr. Gradgrind comes round to the idea that there is "A Wisdom of the heart" and this is also a kind of moral message in that problems can be resolved, and hope is not lost. "Down" is the chapter where Mr. Gradgrind realises the problem with his system. It also is the peak of the damage it has done to Louisa, where she cannot cope with her own emotions. Louisa has become alienated not just from others and the ability to care for and love other human beings but also from herself. She does not know or understand herself, which is why she is unable to cope. This is the main impact that the Gradgrind system has had upon her; although Louisa is a young woman, she is still very childish in her lack of ability to think for herself and cope with her emotions. ...read more.