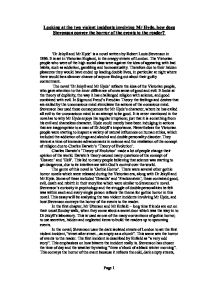 Looking at the two violent incidents involving Mr Hyde, how does Stevenson convey the horror of the events to the reader?

Looking at the two violent incidents involving Mr Hyde, how does Stevenson convey the horror of the events to the reader?

‘Dr Jekyll and Mr Hyde’ is a novel written by Robert Louis Stevenson in 1886. It is set in Victorian England, in the creepy streets of London. The Victorian people who were of the high social class were against the idea of appearing with bad habits, such as addiction, gambling and homosexuality. Therefore due to their hidden pleasures they would have ended up leading double lives, in particular at night where there would be a slimmer chance of anyone finding out about their guilty contentment.

The novel ‘Dr Jekyll and Mr Hyde’ reflects the idea of the Victorian people, who gave attention to the inner difference of ones sense of good and evil. It looks at the theory of duplicity, the way it has challenged religion with science, and good combined with evil. In Sigmund Freud’s Freudian Theory the feelings and desires that are exiled by the unconscious mind stimulates the actions of the conscious mind. Stevenson has used these consequences for Mr Hyde’s character, where he has exiled all evil to the unconscious mind in an attempt to be good. It is never mentioned in the novel as to why Mr Hyde enjoys his regular irruptions; just that it is something from his evil and shameless character. Hyde could merely have been indulging in actions that are inappropriate to a man of Dr Jekyll’s importance. Nevertheless the Victorian people were starting to inspect a variety of natural influences on human ethics, which included the addiction of drugs and alcohol and double personality disorder. They were at a time of immense advancements in science and the retaliation of the concept of religion due to Charles Darwin’s ‘Theory of Evolution’.

Charles Darwin’s ‘Theory of Evolution’ made a lot of people change their opinion of the world. Darwin’s theory caused many questions of the concept of ‘Heaven’ and ‘Hell’. This led to many people believing that science was starting to get dangerous, due to its interference with God’s control over the world.

The genre of this novel is ‘Gothic Horror’. There were several other gothic horror novels which were released during the Victorian era, along with Dr Jekyll and Mr Hyde. Some of these included ‘Dracula’ and ‘Frankenstein’, these contained good, evil, death and rebirth in their storyline which were similar to Stevenson’s novel. Stevenson’s curiosity in psychology and the struggle of double personalities he felt was within each and every single person reflects the theme for gothic horror in this novel. This essay will be analysing the two violent incidents involving Mr Hyde, and how Stevenson conveys the horror of the events to the reader.

In the first chapter, Mr Utterson and Mr Enfield – long time friends are out on their usual Sunday walk, when they come about a secret door which was the way in to Dr Jekyll’s laboratory. This is used as one of the many conventions of gothic horror; to use secretive, hidden and neglected items to build the readers up to upcoming events.

In the novel, Stevenson uses the dark isolated streets of London to set the first violent incident, “street after street…as empty as a church”. This scene sets the horror of events to the reader. The first incident is described by Enfield as “a very odd story”. This emphasises on how bizarre the incident really is. Stevenson has chosen the time of day and the weather by stating “three o’clock of a black winter morning”. This conveys the horror of the event because it reflects the cold, dark empty streets, almost beckoning for danger. Many people would be afraid of stepping out as the scene slots in perfectly with the stereotypical scenery of gothic horror.

Another way in which the reader is hinted of the terrible incident is how Enfield goes into “that state of mind” and “begins to long for the sight of a policeman”. This shows how Stevenson is indicating to the readers that something horrific is about to take place before Enfield. Hence the dreadful incident involved Mr Hyde’s fierce assault of trampling a girl of eight or ten.

The incident involved Mr Hyde having “calmly trampled over the child’s body”. By using the word “calmly”, Stevenson has emphasised the horror of the incident. This shows that Mr Hyde has no feeling of guilt as to his evil action which reflects that of a beast. Another technique Stevenson uses is the conventional monstrous male protagonist preying on vulnerable females used typically in gothic horror. In this case Mr Hyde harming the young girl was “hellish to see”. This shows the terror of the event because Enfield is comparing it to something as horrific as hell.

In chapter four Stevenson has conveyed surprise and horror by setting the Carew Murder Case in a romantic atmosphere involving a naïve maid. “romantically given…fell into a dream of musing” the readers do not suspect anything out of the ordinary. By using this technique Stevenson is leading the readers into a trap by making them believe that there would be no more evil doings by Mr Hyde. However when “an aged beautiful gentleman” is savagely “clubbed” to death in “just under the maid’s eyes”, the reader are shocked and horrified at Hyde’s “ape-like fury”. The maid in turn witnessed this and informed the police after recovering from “the horror of these sights and sounds”.  Hence when the police arrived, they noticed a “sealed and stamped envelope” on the dead corpse which was addressed to Mr Utterson. When Utterson was informed of the murderer being Mr Hyde, he led the police to the secret door immediately. Mr Hyde evidently didn’t care about being discovered as the murderer; we know this because of his barbaric way of murdering Carew in front of witnesses, at a time when people were most likely to be on the street. The reason as to why Hyde is carefree towards his behaviour is that he does not actually exist and can change back to Dr Jekyll, switching between these two personalities to suit his personal needs. He is just the second personality that Jekyll has created within himself.

Stevenson describes Sir Danvers Carew as being “aged” and yet “beautiful”. This shows how conventionally fitting the novel is the theme of gothic horror. Both Mr Hyde’s victims were vulnerable compared to him, either being a young girl or an old man. Both victims of the typical monster-like man who is usually present and reflected on, in gothic horror. These incidents are viewed as very shocking and disturbing to both the Victorian society and the modern. Both societies still view attacking the young and old as highly immoral. The novel shows how far humans can get to be Satan-like.

Throughout the novel Mr Hyde is described plenty of times as being animal-like “having a deformity”. Additionally Mr Hyde was not provoked whatsoever at both the attacks, which makes him seem worse than an animal, For the reason that even an animal would not attack unless irritated. Also he was described as a “damned Juggernaut” meaning that he had an unstoppable force of evil. He was also automatically disliked by anyone he came across. “I had taken a loathing to my gentleman at first sight” and “she had conceived a dislike”. This shows that Mr Hyde has a certain aura around him the affects anyone near him to react in a fearful manner. Moreover when the doctor, Sawbones sets eyes on him, he has a sudden “desire to kill him”. This shows that the hatred towards Mr Hyde can make even a doctor to act unprofessionally. To add to this even the women went “as wild as harpies”. Stevenson used this phrase to metaphorically refer to how spiteful or irritating the women have got, due to Mr Hyde’s presence.

In conclusion I feel that Stevenson has conveyed the horror of the events to the reader greatly. He has used nearly all the conventions of gothic horror, which in turn has made this novel very successful. Stevenson has gone about setting the scenes so as to build the first layer of fear to the reader, by involving the dark desolated dangers of the streets of London. However there were some improvements that could have been changed such as Mr Hyde’s appearance. By making Mr Hyde look more charming would further disarm the victims at the thought of how viscous he really is. Nevertheless Stevenson use techniques to create fear to the readers entirely superior.