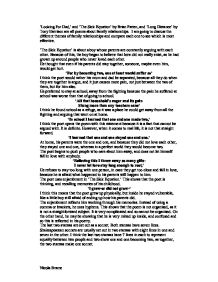 'Looking For Dad,' and 'The Sick Equation' by Brian Patten, and 'Long Distance' by Tony Harrison are all poems about family relationships. I am going to discuss the different themes of family relationships and compare each one to see which is most effective. 'The Sick Equation' is about a boy whose parents are constantly arguing with each other. Because of this, the boy began to believe that love did not really exist, as he had grown up around people who never loved each other. He thought that even if his parents did stay together, someone, maybe even him, would get hurt. 'For by becoming two, one at least would suffer so' I think the poet would rather his mum and dad be separated, because all they do when they are together is argue, and it just causes more pain, not just between the two of them, but for him also. He preferred to stay at school, away from the fighting because the pain he suffered at school was worse than that of going to school. 'All that household's anger and its pain Stung more than any teachers cane' I think he found school as a refuge, as it was a place he could get away from all the fighting and arguing that went on at home. 'In school I learned that one and one made two,' I think the poet opens the poem with this statement because it is a fact that cannot be argued with. ...read more.

He would rather have his dad than all the toys and presents they had given him. He would choose love over material possessions. 'In my dream I was in despair And flung about My underwear But could not find Him anywhere' He is looking under all his things to try to find his dad. The boy gets desperate and is very upset. 'I looked for him Lots and lots Beneath crumpled sheets And old robots' The poet uses 'and' a lot in this quotation. This makes the reader read a lot quicker, as 'and' is used in place of punctuation. This is effective, as it makes the poet sound as if he is panicking, because he cannot find his dad. In addition, reading the poem quicker reflects a child's voice, which adds to the effect of it being written from a child's perspective. Another poem about losing a loved one is 'Long Distance.' This is a poem about a Husband trying to come to terms with losing his wife. The couples' son writes it. The poem opens with 'Though my mother was already two years dead' This is a fact. The poet makes a statement that his mother has been dead for two years. 'Dad kept her slippers warming by the gas,' His father knows that she is dead, but he still keeps everything the same as it was when she was still alive. ...read more.

The poem is about how people cope with death, something that almost everyone will experience at some point in their life. The poem is set out in iambic pentameter. I think this makes the poem seem more real, as it sounds as though the poet is telling someone about the death of his mother. All three poems are about family relationships, although each one differs in actual content. 'The Sick Equation' is about a boy whose parents divorce, and this leads him to believe that he will end up getting divorced also. 'Looking For Dad' is about a boy whose parents by him presents to make up for the fact that they do not show him any love for affection. However, the boy would much rather have love than material possessions, and when his father leaves, the boy believes that it is because all of these possessions have made his room a mess, and his dad left because of this. 'Long Distance' is about a man whose father cannot cope with the grief of losing his wife, and so keeps all of her things around him. The poet does not understand why his father does this, until his father dies, and he then realises how hard it is to cope with losing someone you love so much. Overall, I think that all three poems are very effective at portraying family relationships, but I think that 'Long Distance' does this most successfully. Nicola Brame ...read more.