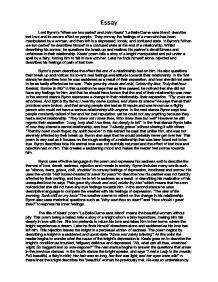 Essay Lord Byron's 'When we two parted' and John Keats' 'La Belle Dame sans Merci' describe lost love and its severe effect on people. They convey the feelings of a man who has been manipulated by a woman, and then left in a depressed, lonely, and confused state. In Byron's 'When we two parted' he describes himself in a confused state at the end of a relationship. Whilst describing his sorrow, he questions the break up and realizes his partner's deceitfulness and unfairness in their relationship. Keats' poem tells a story of a knight manipulated and put under a spell by a fairy, forcing him to fall in love with her. Later he finds himself alone, rejected and describes his feelings of pain of lost love. Byron's poem describes the effect the end of a relationship had on him. He also questions their break up and notices his lover's real feelings and attitude towards their relationship. In the first stanza he describes how he was saddened as a result of their separation, and how she did not seem to be as badly affected as he was. "Pale grew thy cheek and cold, Colder thy kiss; Truly that hour foretold, Sorrow to this" In this quotation he says that as time passed, he noticed that she did not have any feelings for him; and that he should have known that the end of their relationship was near. ...read more.

The poem begins by describing a knight in a saddened and upset state "Alone and palely loitering". At this point the reader begins to wonder what the cause of the knight's depression is. Keats goes on to describe the knight's condition as troubled, fatigued, delirious and depressed. "Ah, what can ail thee, wretched wight, So haggard and so woe-begone?" The next stanza begins to answer the questions that arose in the previous stanzas. In the fourth stanza the knight speaks, and says "I met a Lady in the meads; Full beautiful, a fairy's child; Her hair was so long, her foot was light, and her eyes were wild" In these lines the knight describes the 'beautiful' woman he previously met. He was so undertaken by her beauty and charm that "nothing else saw all day long" But this woman, who was really a fairy, whose only purpose was to cast a spell on this defenseless knight, hypnotized him- making him fall deeply in love with her. "For sideways would she lean, and sing A faery's song" The knight became obsessed with her and expressed his true love and the fairy in turn, pretended to return his love for her. "She look'd at me as she did love, And made a sweet moan" The next stanza describes how the woman provided the knight with food from heaven- possibly hinting that she was an immortal being. ...read more.

The poem is divided into quatrains, which causes a natural pause between the stanzas, which leaves time for the reader to ponder and comprehend what has been said. This seems to create a sense of sadness in the poem, as does the last line of the first and last stanzas of the poem. The lines "Though the sedge is wither'd from the lake, And no birds sing" are a repetition of the first stanza and show how the knight is left to live in a perpetual winter and coldness, as a result of his lost love. This provides a rather haunting and saddening effect as it portrays the knight's inner emotions of pain and sorrow and how it compares with his surroundings. In conclusion, I think that both Lord Byron's 'When we two parted' and John Keats' 'La Belle Dame sans Merci' are quite similar in that they are based on the themes of love, deceit, sadness, exploitation of one's feelings and rejection. They both describe situations where a person is severely affected by lost love, and how they are left in rather depressed and sad state as a result. They seem to focus mainly on the effect the end of a relationship may have on a person and the pain and sadness it may cause. The sadness in the poems is well portrayed by the effective language used and the subject matters. Neesha Fernando ...read more.