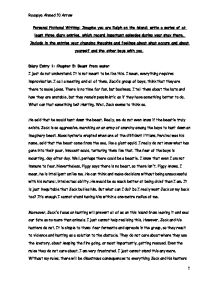 Lord of the flies

Personal Fictional Writing: Imagine you are Ralph on the island; write a series of at least three diary entries, which record important episodes during your stay there. Include in the entries your changing thoughts and feelings about what occurs and about yourself and the other boys with you. Diary Entry 1: Chapter 5: Beast from water I just do not understand. It is not meant to be like this. I mean, everything requires improvisation. I call a meeting and all of them, Jack's group of boys, think that they are there to make jokes. There is no time for fun, but business. I tell them about the huts and how they are unstable, but they remain pessimistic as if they have something better to do. What can that something be? Hunting. Well, Jack seems to think so. He said that he would hunt down the beast. Really, we do not even know if the beastie truly exists. Jack is so aggressive, marching on an army of anarchy among the boys to hunt down an imaginary beast. Mass hysteria erupted when one of the diffident littluns, Percival was his name, said that the beast came from the sea, like a giant squid. I really do not know what has gone into their poor, innocent souls, torturing them like that. The fear of the boys is mounting, day after day. Well, perhaps there could be a beastie. I know that even I am not immune to fear. Nevertheless, Piggy says there is no beast, so there isn't. Piggy knows. I mean, he is intelligent unlike me. He can think and make decisions without being unsuccessful with his natural, intellectual ability. He would be so much better at being chief than I am. It is just inequitable that Jack bullies him. But what can I do? Do I really want Jack on my back too? It's enough I cannot stand having him within a one-metre radius of me. ...read more.

I did not want to leave Piggy with the littluns all night. I thought it was too much responsibility for one to handle, but I suppose Piggy would not mind; he will work things out easily. But Jack did not address this concern for Piggy kindly; he mocked me about it. What good chief would he make if he does not treat the boys with respect? But luckily Simon offered to go and inform Piggy of our whereabouts. Jack was still on his frenzy of hunting a pig, in the dark. Surely he could see that it was not a suitable time to hunt, but he is so impulsive that even he will not be blinded by the darkness that encloses the island. I thought that if we hunt in the morning it would be more apposite. He does not even think twice when I speak to him. I am chief, he should listen to me as any other boy on the island does. Giving the new understanding that Piggy provided me with, and sensing the hostility from Jack, I knew that he loathed me. I asked him why but he had no answer. What would he answer if he had one anyway? I never showed him any hatred but if he wants me to play his game, I will play. He was so pressing to climb up the mountain, even though most of the hunters were 'tired' and, of course, afraid. It was unveiled in their eyes. At that moment I thought of going back myself too, but what Jack said obliged me to remain. He said that I was afraid. I am not afraid more than he is and he knows that, but he just doesn't want to admit it. I was surprised that my voice actually balanced itself proportionally, so that none of my reluctance or weakness showed. I was almost motivated by it. ...read more.

He told us that he and his group were living across the beach, by a flat rock, where they have fun. It was kind of him to invite us to join his tribe, but I know that if I were to join his tribe, there would be no going back and certainly no hope of rescue. I thought he was about to take the conch at first, when I saw him. I mean the conch to me is still a symbol of ritual and order, and without order on this island, there would be nothing. I still do not know why that thought passed through my head at that moment. But I saw that some of his hunters did take some branches of fire. Perhaps they took it to keep warm, or even cook their latest hunting victim on. But even by how much I would like to go to eat the meat and have fun, keeping the fire going was and is still the most important task at hand. It is going to be hard to keep the fire going, and the amount of wood that we need is even harder to get. I suppose Samneric could take two shifts. But Bill appeared sceptical to the whole idea that we will be capable of keeping the fire going. He suggested that we go to Jack and his hunters feast and tell them that the fire is hard among us. Moreover, the fact that there was meat there, hot and satisfying, was enough to make us sprint to cross our enemy's border. Even Piggy could not resist. He was ravenous. I saw it in his eyes. Every face that my gaze landed upon was burning with the overwhelming hunger for meat. No one would ever let a chance like this pass by and we weren't going to either. The thought of food and meat was too appealing, so we gave in to our desire. ?? ?? ?? ?? Rooqaya Ahmed 10 Arrow 1 ...read more.