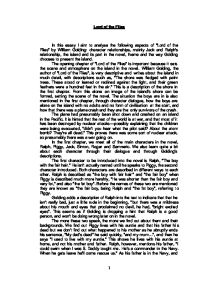 Lord of the Flies In this essay I aim to analyse the following aspects of "Lord of the Flies" by William Golding: character relationships, mainly Jack and Ralph's relationship, the island and its part in the novel, theme and the way Golding chooses to present the island. The opening chapter of "Lord of the Flies" is important because it sets the scene and atmosphere on the island in the novel. William Golding, the author of "Lord of the Flies", is very descriptive and writes about the island in much detail, with descriptions such as, "The shore was fledged with palm trees. These stood or leaned or reclined against the light, and their green feathers were a hundred feet in the air." This is a description of the shore in the first chapter. From this alone an image of the island's shore can be formed, setting the scene of the novel. The situation the boys are in is also mentioned in the first chapter, through character dialogue, how the boys are alone on the island with no adults and no form of civilisation at the start, and how that there was a plane crash and they are the only survivors of the crash. The plane had presumably been shot down and crashed on an island in the Pacific. It is hinted that the rest of the world is at war, and that most of it has been destroyed by nuclear attacks-possibly explaining that the children were being evacuated, "didn't you hear what the pilot said? About the atom bomb? They're all dead." This proves there was some sort of nuclear attack, so presumably there was a war going on. In the first chapter, we meet all of the main characters in the novel, Ralph, Piggy, Jack, Simon, Roger and Samneric. We also learn quite a bit about each character through their dialogue and through Golding's descriptions. ...read more.

They are aware of the potential friction between them. When Jack and his choir leave the fire building to hunt, a "barrier" grows between Ralph and Jack. They successfully bring back a dead sow, but during the chase the fire goes out and a ship sails by. Ralph is furious that they weren't there to help keep the fire going, then the ship may have seen the smoke and the boys would have been rescued. The idea of the beast keeps Ralph and Jack together as a team for longer than they may have been otherwise. Both fear the beast. A discussion about what to do about the beast rages out of control and turns into a shouting match between Ralph and Jack, ending with Jack shouting "Bollocks to the rules!". This shows that Jack is undermining Ralph's authority and is encouraging others to do the same, His slang language shows lack of respect for the order that Ralph is struggling to keep up. Overall Jack rejects Ralph's rule entirely. At the next assembly he says "I'm not going to play any longer". This expression indicates that Jack is quite immature: he still sees life on the island as a "game". This is when Jack goes off to start his own tribe, when the major rift between Jack and Ralph is formed. In the end, Ralph and Jack are deadly enemies, Jack even hunts down Ralph at the very end of the novel, after the death of Piggy, like Ralph is a sow and Jack and his tribe are the hunters. Roger and Simon are a part of Jacks choir, but are totally different from each other. Roger represents evil, as he kills Piggy in a ruthless way. He is also described at the start as "a slight furtive boy" but later on is described as "something foreboding." At first he seemed a quiet and animal-like boy, but later he is described as something "foreboding" which means "a sense of evil or misfortune", but can also mean "an evil omen", which shows he is evil and symbolises the devil. ...read more.

The dramatic change of description from early on in the novel, to near the end shows that the mood of the story changes from a good mood, to a bad mood. Another thing that is described differently at different stages of the novel is the lagoon. At first it is described as, "inside was peacock water, rocks and weed showing as in an aquarium," but then is later described as, "The swell...seemed like the breathing of some stupendous creature." From a pleasant imagery, to horrid simile describing the lagoon as some sort of "creature." I believe Golding wrote this novel to show people that we are all capable of unthinkable things. After the first chapter I want to read on and find out what happens in the rest of the novel. Later on in the novel the mood changes from a relaxed atmosphere, where the boys can have fun without any adults or civilisation, to a tense and thrilling atmosphere, with Jack and his tribe reigning terror over the island. The descriptions of the island go from descriptions representing paradise, to descriptions more related to hell as the novel progresses. One question I would like to ask William Golding is, "Is this novel based more on your personal opinion or more of what you thought people thought at the time you wrote it?", to find out whether the story is more based on his personal opinion or not. The way the first chapter ends, with Jack failing to kill the first pig, but ready to kill next time, leaves me wanting to read on because this is a sure sign that Jack is changing, turning into more of a savage without a conscience to kill the pig. The phrase, "next time there will be no mercy," is what draws me to read on. A next time? This must mean something is going to happen later on and Golding is hinting at that to make the reader carry on reading. 1 ...read more.