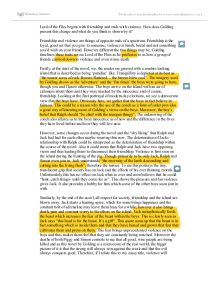 Lord of the Flies begins with friendship and ends with violence. How does Golding present this change and what do you think is shown by it?

Lord of the Flies begins with friendship and ends with violence. How does Golding present this change and what do you think is shown by it? Friendship and violence are things of opposite ends of a spectrum. Friendship is the loyal, good act that you give to someone; violence is harsh, brutal and not something you'd wish on your friend. However different the two things may be, Golding timelines these traits across Lord of the Flies as he professes to us how a group of friends can boil down to violence and even worse death. Firstly, at the start of the novel, we, the reader are greeted with a sombre looking island that is described as being 'paradise' like. Tranquillity is depicted at its best as "the nearer acres of rock flowers fluttered... the breeze blew cool". The imagery used by Golding shows us the 'adventure' and the 'fun times' the boys were going to have, though you and I know otherwise. ...read more.

The deterioration of Jacks relationship with Ralph could be interpreted as the deterioration of friendship within the course of the novel. Also it could mean that Ralph and Jack have two opposing views and thus leading them to disconnect their friendship. Violence is first seen on the island during the hunting of the pig. Though primarily to be only Jack, Ralph and Simon even join in. Jack understands "the enormity of the knife descending and cutting into the living flesh"; therefore the misses. To me this portrays the tiny, translucent grip that society has on Jack and the effects of his ever thinning morals. Unfortunately this has no effect on Jack what so ever and soon believes that he could "hunt, catch things- until they come for us". This shows the pleasure and fun violence gives Jack. It also provides a hobby for him which some of the other boys soon join in with. ...read more.

Therefore, if I relate this to my essay title, violence will conquer friendship. In the novel it says: "A taboo was evolving around that word too" and that word is Jack. Jack's name must not be spoken and is compared to the 'beast' as his name must not be spoken too. To conclude, my own interpretation of the novel leaves me to say that, I think Golding wrote this novel to address the politically wronged world we live in and the constant torture and rule of evil has over good; the victims. Though we are all capable of doing good, we are also capable of doing evil too. Needless to say, Lord of the Flies is a great depiction of Ralph's reaction when he reaches solace: "Ralph wept for the end of innocence, the darkness of a man's heart and the fall through the air of a true, wise friend called Piggy". This description concurs to us the happenings of the novel and the win of violence against friendship. ...read more.

A very good essay which gives intelligent and mature reflections on The Lord of the Flies. Golding explores some complex religious and social ideas within the novel and this student shows that they have not only understand these concepts but can analyse them well.
A logically structured essay with a good introduction and conclusion. More topic sentences would be an improvement and there are some errors in lexical choices.
****