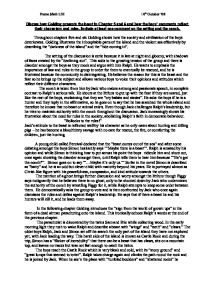 Discuss how Golding presents the beast in Chapter 5 and 6 and how the boys’ comments reflect their characters and roles. Include at least one comment on the setting and the conch.

Throughout chapters five and six Golding shows how the society and civilisation of the boys deteriorates. Golding illustrates the inhospitable parts of the island and the violent sea effectively by describing the “darkness of the island” and the “tide coming in”.

The setting of the discussion is eerie because it is late at night and gloomy, with shadows of faces created by the “declining sun”.  This adds to the growing tension of the group and there is disorder amongst the boys as they mock and argue with him Ralph. He wants to emphasis the importance of law and rules in the group in order for them to eventually be rescued, and he is frustrated because the community is disintegrating. He believes the reason for this is the beast and the fear so he brings up the subject and allows various boys to voice their opinions and attitudes which reflect their different characters.

The conch is taken from him by Jack who makes a strong and passionate speech, in complete contrast to Ralph’s serious talk. He shouts at the littluns to put up with the fear if they are scared, just like the rest of the boys, exclaiming that they are “cry babies and sissies”. He asks the boys if he is a hunter and they reply in the affirmative, so he goes on to say that he has searched the whole island and therefore he knows that no beast or animal exists. Even though Jack challenges Ralph’s leadership, but he tries to maintain authority with the conch throughout the discussion. Jack increasingly shows his frustration about the need for rules in the society, abolishing Ralph’s faith in democratic behaviour.

“Bollocks to the rules!”

Jack’s attitude to the beast is reflected well by his character as he only cares about hunting and killing pigs – he has become a bloodthirsty savage with no care for rescue, the fire, or comforting the children, just the hunting.

A young child called Percival declared that the “beast comes out of the sea” and after some debating amongst the boys Simon hesitantly says “‘Maybe there is a beast”’. Ralph is amazed by his opinion and while Simon is thinking how to put across his point the boys  ridicule him and shout out, once again showing the disorder amongst them, until Ralph tells them to hear him because ‘“He’s got the conch!”’.  Simon goes on to say ‘“…Maybe it’s only us.’” So far in the novel Simon is described as “batty” and he is an odd but clever child with maturity beyond his years. He is portrayed almost as Christ-like figure with his peacefulness, compassion, and kind attitude towards the others.

The mention of a ghost brings further discussion and worry amongst the littluns though Piggy says indignantly that he believes there is no ghost, only to be shouted down by Jack who undermines the authority of the conch by wrestling Piggy for it, while Ralph attempts to keep some order between them.  He democratically asks the group to vote and is then confronted by Jack who once again dismisses the rules and defies against Ralph’s leadership. He says that if there a beast he and his hunters will kill it, and he leads them away.

In the following chapter Golding introduces the “sign from the world of grown ups” in the form of a dead airman parachuting onto the island. This ironically echoes Ralph’s words at the end of the previous chapter.

The parachutist is discovered by the twins Sam and Eric while collecting wood. In the early morning light they rush to wake Ralph and describe a beast with “wings” and “teeth” and “claws.” The older boys Ralph, Jack and Simon set off the search the only part of the island they have not explored yet, with Jack leading the way. This harsh side of the island is known as Castle Rock and during the trip, Simon has a “flicker of incredulity” that there can be a beast that has claws, sits on a mountain top, and leaves no tracks but was not fast enough to catch the twins.

The boys reach the Castle Rock which is very bleak and cold, with its “stony ground” and “great lumps that seemed to totter”. Ralph takes charge again and climbs the path round the rock and he is joined by Jack. When he see’s the place with “tumbled boulders” and “shattered rocks” he excitedly exclaims “‘ What a place for a fort!’” and is even happier when he finds a trickle of fresh water; in his joy he almost forgets the hunt for the beast.

In conclusion, in this part of the novel there are several theories as to the beast, ranging from a sea creature, a ghost, it being nonexistent, or that it is within us – a side of human nature. However, the dead parachutist gives the reader something real and with a physical form – a dead human being as a victim to the cruelty of war and man’s ability to kill.

The Response to Question is poor/average. For the most-part of this essay the candidate is explaining the events of the novel in Chapters 5 and 6. There is very little analysis that retains consistent focus on the question of how ...

The Response to Question is poor/average. For the most-part of this essay the candidate is explaining the events of the novel in Chapters 5 and 6. There is very little analysis that retains consistent focus on the question of how the characters are explained regarding their reactions to the beast. However, where there is analysis, it is very good. The commentaries on the characters that appear dotted throughout the essay, if freed from the re-telling of the story, would form the basis of a very successful essay. All this candidate needs to do is take the good elements of the essay - the analysis of character; the quotes from the narrative and the characters, etc. - and then build a constructive essay form around it without needing to be held together by a re-telling of the events of Chapters 5 & 6.

The Level of Analysis, where there is analysis, is indicative of someone who could achieve a high C/low B grade. Unfortunately, whilst it contributes to AO1 and displays a well-informed understanding of the plot, the re-telling of the story gains no marks because it's just that - a lot of it isn't analysis and there is no insight from the student given. Candidates must avoid re-telling the narrative when it comes to analytical essays, because analytical essay are not memory tests; though understanding the novel and what happens where is an invaluable asset if, like this question, candidates are directed at one particular incident without much clue given as to what actually happens, but having 8/10 of the answer a nothing original wins no marks. It's also a shame that most of this candidates' quote are hung off of this re-telling.
The identification of character traits where applicable though, is exceptional. The recognition of Simon, Jack, the little'uns, et al. is very good though I would encourage candidates to also comment more on Ralph's attitude to the Beast.

The Quality of Written Communication (QWC) is entirely indicative of 1 hour's exam time, with the candidate making a few spelling and grammatical errors which could easily be rectified if they leave 5 minutes towards the end of the exam to proof-read and make sure their QWC is top notch. There is a small range of punctuation used, and examiners want to see confidence in writing, so the use of semi-colons, colons and parentheses to vary sentence structure and sentence length would make the answer much more interesting.