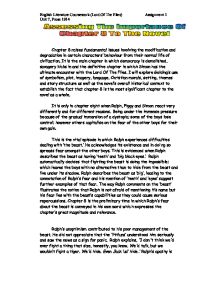 Lord of the flies chapter 8

Chapter 8 raises fundamental issues involving the modification and degradation in certain characters' behaviour from their normal life of civilization. It is the main chapter in which democracy is demolished, savagery kicks in and the definitive chapter in which Simon has the ultimate encounter with the Lord Of The Flies. I will explore Golding's use of symbolism, plot, imagery, language, Christian morals, setting, themes and story structure as well as the novel's overall historical context to establish the fact that chapter 8 is the most significant chapter to the novel as a whole. It is only in chapter eight when Ralph, Piggy and Simon react very differently and for different reasons. Being under the immense pressure because of the gradual immersion of a dystopia; some of the boys lose control; however others capitalise on the fear of the other boys for their own gain. This is the vital episode in which Ralph experiences difficulties dealing with 'the beast.' He acknowledges its existence and in doing so spreads fear amongst the other boys. This is evidenced when Ralph describes the beast as having 'teeth' and 'big black eyes.' Ralph automatically decides that fighting the beast is doing the impossible; which leaves the boys with no alternative than to hide from the beast and live under its shadow. Ralph describes the beast as 'big', leading to the connotation of Ralph's fear and his mention of 'teeth' and 'eyes' suggest further examples of that fear. ...read more.

' When nobody raises their hand, Jack is devastated and publicly humiliated. He runs down the beach and makes an offer to the boys: 'I'm going off by myself. He can catch his own pigs. Anyone who wants to hunt when I do can come too.' This life is obviously more attractive to most of the boys, killing and feasting instead of keeping a fire going. Therefore, inevitably some boys go on his side and begin to follow his footsteps. Jack persuades the littluns by saying, 'We'll hunt, I'm going to be chief', 'I say this, we aren't going to bother about the beast...we're going to forget the beast.' Jack reacts very violently to the beast, but does not aim his anger at the beast, instead he aims it at Ralph's leadership and at hunting. He has bloodlust and loves to hunt and kill, the food is merely a by-product of the adrenaline that it gives him to hunt, chase and kill another animal. He has passed his passion onto his hunters. This is shown in the book when Golding mentions that, 'The hunters followed, wedded to her in lust, excited by the long chase and the dropped blood...' 'From his reaction to the beast, we learn that Jack is a much more natural leader than Ralph, and that he is a much more violent and ruthless character, he will go to extremes for power, and is a very manipulative and spiteful boy. ...read more.