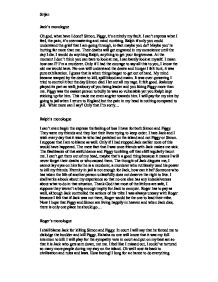 Lord of the Flies Character Monolgues

Jack's monologue Oh god, what have I done? Simon, Piggy, it's entirely my fault. I can't express what I feel, the pain, it's overmastering and mind numbing. Ralph if only you could understand the grief that I am going through, in-fact maybe you do? Maybe you're hurting far more than me. Their deaths will get engraved in my conscience until the day I die. I would do anything Ralph, anything to get your forgiveness. At the moment I don't think you can bare to look at me, I can barely look at myself. I mean how can I? I'm a murderer. Only if I had the courage to say all this to you, I know the old me would have. No-one will understand the desire and hunger I felt hunt, it was pure exhilaration. I guess that is when things began to get out of hand. My mind became warped by the desire to kill, spill blood and maim. It was over-powering I tried to control it but the day Simon died I let out all my rage. It felt good. Jealousy played its part as well; jealousy of you being leader and you liking Piggy more than me. ...read more.

Maybe it will haunt that island forever. Now I am free because there isn't any beastie where I live, hehe. I can do what I like. Ralph seemed a good leader at first but he was too preoccupied with the 'fire' and rescue. Jack was a better leader but he never fully got to that stage of really wanting to cause pain to theto the other children on the island. Instead it was always hunting with him. He wasn't able to see that I was bored hunting pigs. I wanted to hunt littluns. Samneric's monologue We were scared of Jack, really really scared. We hope that Ralph doesn't think that we betrayed him. We couldn't help it Jack forced us to join him, he said that if we didn't he would torture us. Roger also kept making threats to us and eventually it slipped out that you were hiding nearby. Our time in Jack's tribe was really quite boring and scary. At all times we were frightened that if we did anything wrong, Jack or Roger would hurt us. Almost all of the boys felt that way, we only did what Jack told us to do because we were scared of him, there wasn't any other reason. ...read more.

The other children slowly absorb Jack's views because he is the head of that particular family, jack however turned nasty due to a return to primeval instincts. Cruelty flourishes in conditions where there is much fear, lack of parental guidance, feeling of nothing to lose , despair Hard to see if Jack felt despair, but certainly Ralph and Piggy do, instead they do not give up hope--> golding says 'capacity for selflessness and love' this is shown by Piggy (towards littluns + Ralph (when he helps the crying one talk bout beastie)) Simon shows love towards all of nature, but he is not understood by others and is called 'batty'. Again lack of parental guidance to tell them right from wrong...+ children not on island are 'going wrong' so imagine the difficulty for children on an island... Humanist view: Fear- no one escapes fear, shown by the 'beast' not including simon (he is afraid of speaking out) Tyranny,- Jack becomes a servant of his own thirst for blood,he does not rule himself, the hunger does, gets power and the situation becomes worse, breaks away from Ralph On the island everything moral does not need to exist for them to survive, so some take advantage of it, and act the way they do, Srijan ...read more.