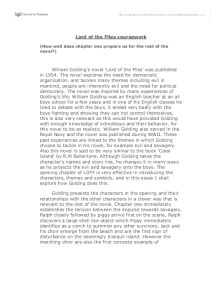 Lord of the flies- english coursework how well does chapter one prepare us for the rest of the novel.

Lord of the Flies coursework (How well does chapter one prepare us for the rest of the novel?) William Golding's novel 'Lord of the Flies' was published in 1954. The novel explores the need for democratic organization, and tackles many themes including evil in mankind, people are inherently evil and the need for political democracy. The novel was inspired by many experiences of Golding's life; William Golding was an English teacher at an all boys school for a few years and in one of his English classes he tried to debate with the boys, it ended very badly with the boys fighting and showing they can not control themselves, this is also very relevant as this would have provided Golding with enough knowledge of schoolboys and their behavior, for this novel to be so realistic. William Golding also served in the Royal Navy and the novel was published during WWII. These past experiences are linked to the themes in which Golding choose to tackle in his novel, for example evil and savagery. Also this novel is said to be very similar to the book 'Coral Island' by R.M Ballantyne. Although Golding takes the character's names and story line, he changes it in many ways as he projects the evil and savagery onto the boys. ...read more.

As the boys turn their rage against the pigs, Golding foreshadows Piggy's own murder at the close of the novel. The relationships with other characters for example Jack being jealous of Ralph being voted chief, which later on in the novel Jack becomes the leader of his own tribe which wants to kill Ralph, and the roles the characters adopt at the beginning of the the novel for example Piggy's intelligence, are very relevant to the rest of the novel. In the choir Jack and Simon are the only boys really to be singled out from the rest of the choir. Jack as he is the leader, and Simon when he faints at the first meeting of the boys. This foreshadows later on in the book when he faints in front of the 'beast' Lord of the Flies. Also he is picked to explore the island along side Jack and Ralph in the first chapter and when the three of them are walking he 'walks between them.' This foreshadows him being stuck in the middle when Ralph and Jack lead there own groups when savagery breaks out later on in the novel. The choir as a group is also foreshadowed in chapter one by the use of metaphors. ...read more.

It is appropriate for Piggy to be the owner of the glasses that are used as a symbol of intelligence because Golding creates the character's image as an adult-like character. Just like the conch, Piggy's glasses also deteriorate throughout the novel foreshadowing the events of the plot. In contrast to the the glasses, Jack's knife symbolizes the boys infinite savagery and the growing antagonism among the boys on the island. Therefore, throughout the novel, Golding uses inanimate objects; the glasses, the knife and the conch, and language as symbols for foreshadowing. In conclusion to the question how well does chapter one prepare us for the rest of the novel. I believe it prepares us, the reader, very well for the rest of the novel as Golding presents the characters, the setting and various objects in such a way that they foreshadow events later on in the novel but cleverly with out giving away the plot. Golding tackled some very important issues in his novel, some that are still relevant today including the need for political democracy and how society can break down. In this essay I have discussed how Golding's clever techniques in the first chapter prepared us very well for a very good novel with some unexpected events ...read more.

In response to a question that asks how the opening chapter of William Golding's 'Lord of the Flies' prepares readers for the rest of the novel, this candidate has done well to address many of the ideas and allegories drawn ...

In response to a question that asks how the opening chapter of William Golding's 'Lord of the Flies' prepares readers for the rest of the novel, this candidate has done well to address many of the ideas and allegories drawn up in just a few pages. Commenting on character, description and context (perhaps a little too extensively here) this candidate looks set to achieve a high B grade for their efforts. What could be improved though, is the focus on the possibilities that Golding hints at and how he hints at them. Candidates answering questions like these (this is a very popular question for this novel) will need to approach the question from the perspective of someone who does not know what happens in the rest of the novel, so really, it's more about writing from the stance of someone questioning what could happen, rather that writing from the perspective of someone who knows what happens.

The Level of Analysis shown by this candidate is good, if it does indeed trail off into analysis of things other than what the question specifically asks. The contextual information is possibly a little too extensive and not all of it is required, but nonetheless as it is there, the candidate cannot be marked down for it as it demonstrates a highly sensitive awareness of the social and historical factors that influences Golding's text. However, in an exam conditions it would probably be best to integrate the contextual appreciation into the analysis, rather than lump it in block paragraph as one big chunk at the beginning of the essay.
Elsewhere, this candidate excels on their analysis of Ralph's character, and also how our first encounter with Jack Merridew and the choirboys suggests that civilisation is still present, though it would be apt to suggest here what this foreshadows about the novel - how will this delicate social construct change throughout the course of the novel? Doing this is directly addressing the question, which asks candidate to address the unknown as they are only told to focus on the first chapter and what it tells us about the novel.

The Quality of Written Communication is good. There is little evidence of a more complicated syntax or use of punctuation which suggests the writer is not a fully-fledged confidant in their writing ability under exam/coursework pressure just yet, but even so, it is obvious this candidate has read and re-read their answer in order to make sure that all their spelling is correct and accurate.