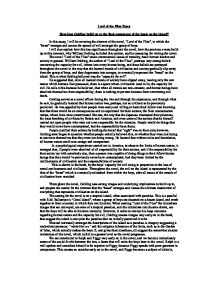 Lord of the Flies Essay How does Golding build up to the final emergence of the beast on the island?

Lord of the Flies Essay How does Golding build up to the final emergence of the beast on the island? In this essay, I will be covering the element of the novel, "Lord of the Flies", in which the "beast" emerges and causes the spread of evil amongst the group of boys. I will also explain how this has significance throughout the novel, how the previous events build up to this moment, why William Golding included this section, and his reasoning for writing the novel. The novel "Lord of the Flies" raises controversial issues of morality, basic human instinct and society in general. William Golding, the author of "Lord of the Flies", portrays very strong beliefs concerning the capacity for evil, inborn into every human being, and these beliefs are portrayed throughout the novel in the way that the learned morals of civilisation and society gradually slip away from the group of boys, and they degenerate into savages, to eventually represent the "beast" on the island. This is what Golding believed was the "capacity for evil". He suggested that, once all learned morals of society have slipped away, leaving only the raw nature which humans first possessed, there is a space where civilisation used to lie; the capacity for evil. He calls it this because he believed, that when all morals are non-existent, and human beings have absolved themselves from responsibility, there is nothing to prevent humans from committing evil deeds. Golding served as a naval officer during the war and through his experience, and through what he saw, he gradually learned that human nature was, perhaps, not as civilised as he previously perceived. He was appalled by how people were ready and willing to harm their fellow men knowing that that there would be no consequences and no reprimand for their actions; the Nazi concentration camps, where Jews were exterminated like rats, the way that the Japanese mistreated their prisoners, the mass bombing of civilians by Britain and America, and even some of the actions that he himself carried out upon people who were not even responsible for the situation. ...read more.

The next stage in Jacks deterioration is when he absolves himself of responsibility, and liberates himself behind the mask. It became a new face, he became "an awesome stranger" and Jack's "laughter became a bloodthirsty snarling...the mask was a thing on it's own, behind which Jack hid, liberated from shame and self consciousness." The snarling is symbolic of Jack's descent to his basic animal instincts, to hunt and survive, and now that he has been liberated from shame, it suggests that he could now be capable of anything without remorse. It is also this chapter in which Jack's hunters let the fire out in order to go hunting, when there is a ship on the horizon and the possibility of rescue is more real. However, with no signal, they are not rescued. This is what finally portrays to the reader Jack's loss of morals, when he has killed his first pig and is confronted by Ralph for letting the fire out. Jack is "vaguely irritated by this irrelevance but too happy to let it worry him". It is clear from this that Jack has forgotten the importance of the fire because the civilisation of his previous life has been forgotten, and he is also incredibly satisfied at killing his first pig, something that he would not have contemplated doing had the morals of his old life been present. We can see from Jack's actions that the lack of civilisation has allowed him, gradually, to lose all morals and this has allowed him to degenerate to the level of a savage. The group, as a whole, have not lost the morals of their old life to the extent that Jack has, and this can be seen in stages of the dance, when they mime the killing of the pig. The first stage is symbolic of the slight loss of morals, which has enabled them to hunt. ...read more.

For Golding implies that, without the presence of civilisation, humans would act in a way that they would have been required to behave in order to survive, and degenerate until they are no more than animals, or beasts. By this he implies that, led by their desires and needs, and absolved of responsibility, the natural instinct for humans is to behave in an evil manner. I disagree that humans are evil, because otherwise how could civilisation have developed in the first place? If everybody acted in an evil way, then this behaviour would have been considered acceptable, and "normal" and nobody would feel the need to say what was right and what was wrong, because everybody would behave in the same manner. If this was the case, actions such as murder would be accepted as any other essential impulse would be such as eating or sleeping, however, this is not the case, because society has taught us that these things are wrong. This shows that there is an even larger capacity in human nature for good and decency, which overcomes the capacity for evil and enables humans to form a civilisation. So human nature is not basically evil, despite people that do evil things, when absolved of responsibility, people do what they feel is necessary at any given moment, which may be an evil deed, such as those seen by Golding in the war. This does not mean, however, that these people are evil, merely that they are doing what they feel is necessary at that given time, in their case, to save their country. Of course it is undeniable that there are people who do murder, without justification, and people who do commit evil deeds without necessity, but it must be remembered that these are part of a vast minority, and this is not present in the basic human nature, which has a far greater capacity for good than evil. ...read more.