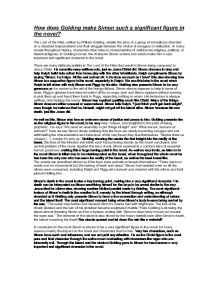 Lord of the flies. How does Golding make Simon such a significant figure in the novel?

How does Golding make Simon such a significant figure in the novel? The Lord of the Flies, written by William Golding, details the story of a group of schoolboys stranded on a deserted tropical island and their struggle between the choice of savagery or civilization. In many novels throughout history, characters often take on characteristics of well known religious, political, or historical figures. In Golding's novel, the character Simon actions and words make him a very important and significant character in the novel. There are many biblical parallels in The Lord of the Flies that result in Simon being compared to Jesus Christ. He commits many selfless acts, just as Jesus Christ did. Simon chooses to stay and help Ralph build huts rather than horse play with the other inhabitants. Ralph compliments Simon by saying "Simon. He Helps. All the rest rushed off. He's done as much as I have" this also showing how Simon is a supportive figure in the novel, especially to Ralph. ...read more.

Golding presents him as the religious figure in the novel, to be very wise, mature, and insightful to the point of being prophetic. He says "We need an assembly to put things straight" and "What are we, humans or animals?" here we see Simon slowly realising that the boys are slowly becoming savages and are withholding the characteristics and behaviour of the very beast they fear themselves. "Maybe there is a beast [...], maybe it's only us." Golding showing the reader the first insight into the reality of the beast, this idea of the inherent evil within each human being stands as the moral conclusion and central problem of the novel. Against this idea of evil, Simon represents a contrary idea of essential human goodness, making this a huge turning point in the novel. As well as very ironic, as later on in the novel Simon is killed due to be misinterpreted as the beast, when throughout the whole novel he has been the only one who has seen the reality of the beast, as well as the least beast like. ...read more.

The line of his cheek silvered and the turn of his shoulder became sculptured marble." Here Golding is showing the island almost dressing Simon as if for a funeral, ending with "Simon's dead body moved out toward the open sea." The remorse of the island is also shown by the heavy rainfall soon after Simon's death, the island mourning his death;"the clouds opened and let down the rain like a waterfall". In conclusion in the novel Simon is shown to be a very significant figure in the novel, for many reasons mainly the impact on the novel and characters that he has. Very few characters, such as Simon have such vast influences, and are not paid any attention. He as the Christ figure is the most pure and kind character through the entire novel contrasting with characters like roger who are inherently evil. Through the island and the wisdom Golding gave to Simon he has become a very important and significant character in the novel. Rina Bimbh 11W ?? ?? ?? ?? ...read more.

This is a good essay but would have been much better if a little longer. There are some thoughtful and perceptive comments and the student focuses on Simon symbolising Jesus. Simon is also an 'outsider' which led to his murder, and a child of nature. Well selected quotes throughout and some intelligent comments.
Occasional lapses in expression.

This is a good attempt at tackling a question that has a multitude of answers due to the overtly allegorical nature of Golding's text. Simon is a hugely important character, and there is much that can be noted; though not ...

This is a good attempt at tackling a question that has a multitude of answers due to the overtly allegorical nature of Golding's text. Simon is a hugely important character, and there is much that can be noted; though not all of it is required to achieve a high grade - just an acknowledgement of a few important characteristics with an effective analysis. The candidate has provided this and provides it well, noting a number of important characteristics Golding has drawn in Simon and commenting on them at fair length, to fair depth and with an excellent use of quotes and references to the novel.

The Level of Analysis sits above average. A lot of points made can be quickly read as they are only quickly stated, but where the candidate delves deeper into analysis is where their true understanding and appreciation of the novel shows. There is effective and insightful comparisons drawn between his character and that of Jesus Christ, though a few more explicit points could be made - such as the act of retrieving food where there appears to be none to feed the hungry littluns, which can be compared to Jesus' feeding of the five thousand; though the point is clearly made to provide evidence for the altruistic nature of Simon, it could be taken further. Elsewhere, the candidate makes good use of the other motifs and how Simon's interactions with them help convey his character. There appears to be a sound understanding of Simon's use within the book, though I would recommend a greater effort should be expended of Simon's differences to the other boys and how this strengthens the perceived holiness of a boy who is untouched by evil. For example, why does the island turn against the boys after Simon's death? What then, do you think Simon's very presence was doing in favour of the boys? It's clear that he was almost acting as a guard for the boys - the island of course, is the root of the evil that turns the boys into primitive savages - and without Simon there to fend the evilness off, the boys are instead left exposed to the evil to finally consume them. Just as with Jesus who, on an intimate scale (12 disciples/Ralph and Piggy) was a saviour but in the larger scheme of the rulers (Pontias Pilate/Jack) he was a nuisance, he was defeated and the sin overcame the murderers.

Though the above is not necessary for an essay so proficient, it shows the level of depth required to achieve the highest grade boundaries. Nonetheless, this essay can expect to achieve a low/middle A grade for it's excellent analysis of Simon's character.

The Quality of Written Communication (QWC) is where this essay loses a few marks. Though not completely illegible, a misuse of grammar often leads to a complication in conveyance. Small things like "Golding showing the reader the first insight into the reality of the beast", omitting the word "is" after "Golding" are easily corrected if the candidate re-reads the essay, but bigger errors like comma splice and incorrect separation of clauses with full stops (e.g. - "Simon represents a contrary idea of essential human goodness, making this a huge turning point in the novel. As well as very ironic, as later on in the novel Simon is killed") need closer examination as these will lower the QWC mark.