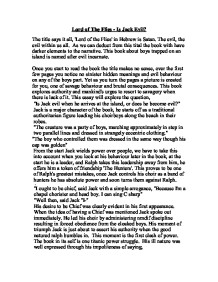 Lord of The Flies - Is Jack Evil?

Lord of The Flies - Is Jack Evil? The title says it all, 'Lord of the Flies' in Hebrew is Satan. The evil, the evil within us all. As we can deduct from this tital the book with have darker elements to the narrative. This book about boys trapped on an island is named after evil incarnate. Once you start to read the book the title makes no sense, over the first few pages you notice no sinister hidden meanings and evil behaviour on any of the boys part. Yet as you turn the pages a picture is created for you, one of savage behaviour and brutal consequences. This book explores authority and mankind's urges to resort to savagery when there is lack of it. This essay will explore the question, "Is Jack evil when he arrives at the island, or does he become evil?" Jack is a major character of the book, he starts off as a traditional authoritarian figure leading his choirboys along the beach in their robes. "The creature was a party of boys, marching approximately in step in two parallel lines and dressed in strangely eccentric clothing." "The boy who controlled them was dressed in the same way though his cap was golden" From the start Jack wields power over people, we have to take this into ...read more.

Placed in a position of power and with his followers sharing his crazed hunger for violence, Jack gained encouragement to commit the vile acts of thievery and murder. "We don't want you," Jack had said to Piggy." Piggy was like an observer learning from the actions of others. His status in their society allowed him to look at the boys from an outsider's Perspective. Jack uses Piggy not as a regular bully, he humiliates him for power, and the pleasure of being able to isolate him from other people, this isn't evil it is just natural child behaviour that is brought out stronger because the island effects them so much. Jack was a spiteful boy at the start, he was a bully, a petty tyrant who ruled &s little choir with insults and name calling. Liberated from authority he created his own "rules". "We'll have rules" "Lots of them!" "whoever breaks them..." Jack is the first to create order, but does not keep it. Ultimately Jack is a child he cannot stand not being the most important person. Gradually, Ralph became confused and began to lose clarity in his thoughts and speeches. "Ralph was puzzled by the shutter that flickered in his brain. ...read more.

The devil takes the form of a boars head, the hunters, the primal urges a sybol of the destruction we let loose when we lose control. Whilst Piggy looks at things in a clear scientific view and is answered back with abuse and in the end death. Roger a hunter, a psychotic from the start you can see the evil of his character he is the one always with Jack, always on the hunt, always ready for the kill. The deaths of two innocents mark the end of the fire, the end of the conch the symbol of meeting. It means the end of society on the island, the end of law and the rule of justice. In conclusion I think Golding knew exactly what boys are like, he made us see a compelling story, with vivid realism which tells a tale of the disintergration of a civilisation under the pressure of blood and savagery and a bloody climax. The book shows the fear of the dark in men's hearts, the loss of innocence, that society can easily be undone, that some times the people, with the most knowledge are shunned. Most of all it tells a tale of Jack, a boy turned into an evil savage, the most shocking of all the aspects in the book. By James Goddardll.SJ ...read more.