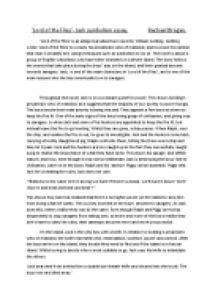 Lord of the Flies -Symbolism and the Character of Jack.

﻿?Lord of the Flies?- Jack symbolism essay. Rachael Brogan. ?Lord of the Flies? is an allegorical adventure novel by William Golding. Golding wrote ?Lord of the Flies? to convey his pessimistic view of mankind, and to prove his opinion that man is innately evil, using techniques such as symbolism to do so. The novel is about a group of English schoolboys who have been stranded on a desert island. The story follows the events that take place during the boys? stay on the island, and their gradual descent towards savagery. Jack, is one of the main characters in ?Lord of the Flies?, and is one of the main reasons why the boys eventually turn to savagery. Throughout the novel, Jack is on a constant quest for power. This shows Golding?s pessimistic view of mankind, as it suggests that the majority of our society is power hungry. The boys decide their main priority is being rescued. They appoint a few boys at a time to keep the fire lit. One of the early signs of the boys losing grasp of civilisation, and giving way to savagery, is when Jack and some of his hunters are appointed to keep the fire lit, but instead leave the fire to go hunting. ...read more.

At first Ralph has authority over Jack, because of the conch; the shell that symbolises civilisation on the island. However, by the end of the book, Jack has won authority over Ralph, and the conch is destroyed, backing up Golding?s opinion that evil will always win over good. When Jack decides to leave Ralph?s group and start his own tribe, Ralph tries to stop him. ??I?ll blow the conch,? said Ralph breathlessly, ?and call an assembly.? ?We shan?t hear it.?? Jack has voiced the fact that he wants to start his own tribe, and live the way he wants to. The authority that Ralph and the conch have over him is forgotten; this shows Jack?s final detachment from civilisation and portrays how his descent into savagery is complete. The pinnacle of this journey, from civilisation to savagery is at the end of the book. Ralph is being hunted by Jack?s tribe. The fire that he tried so hard to keep alive is burning the island down. This proves Golding?s pessimistic view, as all signs of civilisation have been destroyed by savagery and evil. ...read more.

At the end of the novel, the fire is destroying the island. Ralph is running down the mountain towards the beach, trying to escape from Jack and his gang, and the fire that is quickly swallowing the island. Golding uses this to portray how savagery had well and truly taken over and there was no escape. Then, Ralphbumps into a naval officer. After explaining what has happened on the island, Ralph turns round to see Jack?s tribe crying, and the island demolished. ?For a moment he had a fleeting picture of the strange glamour that has once invested the beached. But the island was scorched up like dead wood.? The boys crying, and the island destroyed symbolises the loss of the boys innocence. This backs up Golding?s pessimistic view of mankind and tells us that although the good in our society is overpowered by evil, those who carry out injustices, probably will not be punished. To conclude, ?Lord of the Flies? is a novel, written to convey the author, William Golding?s pessimistic view of mankind, using symbolism in the main characters to do this. In this essay, I revealed how Golding used symbolism to convey the character Jack as a power hungry dictator, and how he, was one of the main reasons the boys all turned to savagery. ...read more.