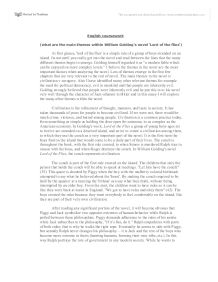 English coursework (what are the main themes within William Golding's novel 'Lord of the flies') At first glance, 'lord of the flies' is a simple tale of a group of boys stranded on an island. Its not until you really get into the novel and read between the lines that the many different themes begin to emerge. Golding himself regarded it as "a modern fable which can be enjoyed on more complex levels." I believe the themes in the novel are the most important factors when analyzing the novel. Lots of themes emerge in the first few chapters that are very relevant to the rest of novel. The main themes in the novel is civilization v savagery. ...read more.

It is the first item the boys find on the island that would come to be a daily part of their lives. The conch is throughout the book, with the first rule created, to when Simon is murdered Ralph tries to reason with the boys, and when Roger destroys the conch. In William Golding's novel Lord of the Flies, the conch represents civilization. The conch is part of the first rule created on the island. The children that only the person that holds the conch will be able to speak at meetings. "Let him have the conch!" (35). This quote is shouted by Piggy when the boy with the mulberry colored birthmark attempted to say what he believed about the 'beast'. ...read more.

Ralph empathizes with parts of both sides; that is why he walks the tight rope. Eventually he seems to side with Piggy, but actually Ralph never changes his philosophy- it is Jack and the rest of the boys who become more extreme in theirs (hunting humans, forming their own tribe, etc.). In this way Ralph portrays the role of government in any modern society. While he wants to satisfy the wishes of the public, he must also realize that certain rules of behavior must be followed in order to prevent anarchy. In conclusion, In this essay I have discussed only a few of the many themes of civilization which emerge in this exciting novel. Its not until you really read between the lines that you can experience this novel on a more complex level. ...read more.

The Response to Question here is focused at the best of times, but quite frequently it can be said that the answer is simply written badly. Along with a poor sense of structure, the candidate only very briefly touches upon ...

The Response to Question here is focused at the best of times, but quite frequently it can be said that the answer is simply written badly. Along with a poor sense of structure, the candidate only very briefly touches upon the area that will gain marks, and often dedicates far too much time elaborating their points in fields that elicit no marks