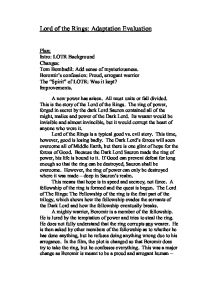 Lord of the Rings: Adaptation Evaluation

Lord of the Rings: Adaptation Evaluation Plan: Intro: LOTR Background Changes: Tom Bombadil: Add sense of mysteriousness. Boromir's confession: Proud, arrogant warrior The "Spirit" of LOTR: Was it kept? Improvements. A new power has arisen. All must unite or fall divided. This is the story of the Lord of the Rings. The ring of power, forged in secret by the dark Lord Sauron contained all of the might, malice and power of the Dark Lord. Its wearer would be invisible and almost invincible, but it would corrupt the heart of anyone who wore it. Lord of the Rings is a typical good vs. evil story. This time, however, good is losing badly. The Dark Lord's forces will soon overcome all of Middle Earth, but there is one glint of hope for the forces of Good. ...read more.

In the film, the plot is changed so that Boromir does try to take the ring, but he confesses everything. This was a major change as Boromir is meant to be a proud and arrogant human - the author J.R.R. Tolkien always shows most humans as easily corrupted. A large omission was Tom Bombadil. He was a "father of the forest" type man who has powers of song and looks after the ring bearer. Tolkien added him to add a sense of mysteriousness to Lord of the Rings - nobody knew who he was or where he came from. This was missed out in the film. Characters like him really did help the spirit of Lord of the Rings. Form one point of view; the film did not keep the spirit of Lord of the Rings at all. Parts were missed out and some of the film seemed like a traditional Good vs. ...read more.

Because films need a great plot to be good, the director (Peter Jackson) has taken the good parts and made them great - he has really concentrated on the right parts. The film however was a bit too different from the book at times and too close at others. For example, there is an "I'm dead, oh no I'm not" scene part which was fine in the book, but should have been changed in the film. Another change that should have taken place was the fact that elves are shown as a dying any fading race in the Lord of the Rings film. In the book, elves couldn't die and the elves simply were leaving the land, not dying out. This was probably shown to make humans seem better. In conclusion, the Lord of the Rings film made great use of an excellent plot and unusual story. I think that the film was very good, but there was a small amount of room for improvement. Gopal K Kotecha ...read more.