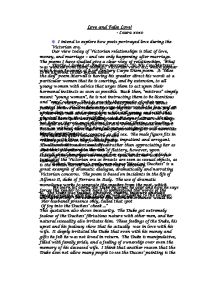 Love and False Love!- Explore how poets portrayed love during the Victorian era.

Love and False Love! - Laura xoxo I intend to explore how poets portrayed love during the Victorian era. Our view today of Victorian relationships is that of love, money, and marriage - and sex only happening after marriage. The poems I have studied give a clear view of relationships. What was wanted from them, feelings, Victorian views etc, which appear to be different to our initial ideas! Firstly, I looked at Andrew Marvell's "To His Coy Mistress", which is an example of a 17th century Carpe Diem poem. A "seize the day" poem Marvell is having his speaker direct his words at a particular women that he is courting, and by extension, to all young women with advice that urges them to act upon their hormonal instincts as soon as possible. Back then, "mistress" simply meant "young woman", he is not instructing them to be licentious and "easy" whores. ...read more.

He piles upon her lots of flattery, however, upon studying the poem you can see that it is all about her looks! For example: "An hundred years should go to praise Thine eyes, and on thy forehead gaze Two hundred to adore each breast But thirty thousand to the rest." It is all about her physical image; her eyes, her breasts - which is typical of the Victorian era as breasts are seen as sexual objects, as is the woman herself - and then the rest of her body. Robert Browning's early monologue "My Last Duchess" is a great example of dramatic dialogue, dramatically and narrating Victorian concerns. The poem is based on incidents in the life of Alfonso II, duke of Ferrara in Italy. The use of dramatic monologue works to separate the speaker from the poet, which forces the reader to work hard to understand the words of the speaker arguing with his 2nd self as well as talking to the listener. ...read more.

Now that she is dead, the picture is like her remains, and it makes him happy to feel that he finally has her all to himself; plus, he is acting like he did not love her and is over her, by not having the painting covered and, from the impression we get, moving on to his next Duchess. We even get the impression that he might have murdered her Could it have been that his insecurity and irritation could have drove him to get rid of the one thing he could never control? Perhaps when "all the smiles stopped altogether"? The two poems have extreme contrast. "To His coy Mistress" is a poem about sexual fulfilment, beauty and obtaining a husband by giving a man what he ultimately wants according to this poem - sex. "My Last Duchess however ultimately shows that money and power cannot buy love. For this moral commentary in dramatic monologue, Browning draws from the traditions of Shakespeare's soliloquies to offer the reader that "truth broken into prismatic hues". ...read more.