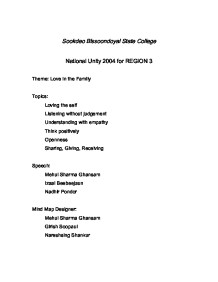 Love in the Family.

Sookdeo Bissoondoyal State College National Unity 2004 for REGION 3 Theme: Love in the Family Topics: Loving the self Listening without judgement Understanding with empathy Think positively Openness Sharing, Giving, Receiving Speech: Mehul Sharma Ghansam Izaal Beebeejaun Nadhir Pondor Mind Map Designer: Mehul Sharma Ghansam Girish Soopaul Nareshsing Shankur Sketch: Renga Thielamay Adil Jhungeer Ashwin Contact: ghansam@intnet.mu By Izaal Beebeejaun Sookdeo Bissoondoyal State College Lower Six T1 Loving the self "Ooooh, I love myself" When someone says this sentence you tend to feel that this guy is selfish and above all arrogant. But not at all, somebody should start to love himself he would eventually start to respect himself and then he can feel the same for the people of his immediate surroundings that is his family. Now what would happen if someone does not have this feeling of love and respect for himself? Such a person would have nothing else but negative thoughts towards himself and consequently towards his surroundings, and there is no closer surroundings than one's own family. As such someone feels tension all day and all around him, moreover within his family. Such an atmosphere can never bring the feelings of peace and harmony, which are essential for a family to have among its members and thus be happy. ...read more.

The best example of Openness in the Mauritian society is that children are free to choose their subjects in which they want to specialize after. Though, we live in a materialistic world, the "money-solves-all" mentality is insufficient to counter problems such as youth decline, family breakdown, drugs and AIDS. Thus it is better to open the world to the adolescents as they are the future of Mauritius. "Unity leads to peace and peace bring progress" Thank you for your kind attention. By Mehul Sharma Ghansam Sookdeo Bissoondoyal State College Lower Six T1 Sharing, Giving and Receiving We, human beings have feelings which we need to share. It is better to live in a society whereby everybody shares their feelings. Love is the desire to share or the act of sharing. Special love is a special affection for someone or something, a feeling or emotion. Anything, we share is love. We can share time, goals, problems, activities. Anything we share with another, we are expressing love. Encouragement is one of the main forces of a family. Every member supports each other in moments of difficulty. For example, if someone in the family is taking part in an important examination, all the family members would encourage, give him moral support and help him the way the could. ...read more.

Thinking positively shows that there is a mutual respect between two people. Another example is the interaction between the parent and their children. Many parents are against the idea of their son or daughter befriending a person of different sex. This can be at time very annoying to the child. The parents must think of it in a positive manner. If they know that they can trust their child enough and that the latter will not commit any mistake that will make either the child or the parent regret the problem of negative thinking will not arise at all. If instead the parent has positive thinking of his son or daughter, the latter will never try to deceive the parent. These two vivid examples show you how bring along love and peace in a family. As you can see, lack of trust in a family destroys its peace and there will never be peace in the family. So trust in a family is a very important factor and this will allow have national unity in the family. All relation is based on trust. It is very important to trust your partner, son or whatever it may be as it will allow to create a better relation. Thank you. ...read more.