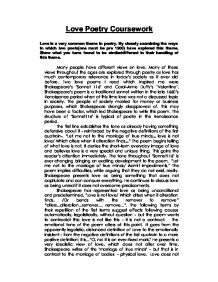 Love is a very common theme in poetry. By closely examining the ways in which two poets(one must be pre 1900) have explored this theme. Show what you have found to be similar/different in their handling of this theme.

Love Poetry Coursework Love is a very common theme in poetry. By closely examining the ways in which two poets(one must be pre 1900) have explored this theme. Show what you have found to be similar/different in their handling of this theme. Many people have different views on love. Many of these views throughout the ages are explored through poetry as love has much contemporary relevance in today's society as it ever did before. Two love poems I read which inspired me were Shakespeare's 'Sonnet 116' and Carol-Anne Duffy's 'Valentine'. Shakespeare's poem is a traditional sonnet written in the late 1660's Renaissance period when at this time love was not a discussed topic in society. The people of society married for money or business purposes, which Shakespeare strongly disapproved of. This may have been a factor, which led Shakespeare to write this poem. The structure of 'Sonnet116' is typical of poetry in the Renaissance period. The first line establishes the tone as already having something defensive about it - reinforced by the negative definitions of the first quatrain-. "Let me not to the marriage of true minds... love is not love/ Which alters when it alteration finds..." The poem begins telling of what love is not. It denies the short-term everyday image of love and believes love is a very special and unique thing. This gains the reader's attention immediately. ...read more.

The rhyming couplet emphases the strong conclusion. Shakespeare concludes by making a direct statement. This encourages the reader to follow his viewpoint of a seemly fixed attitude to love and its permanency. Shakespeare heightens his integrity and the meaning of the poem by ending on this direct note. In comparison Carol-Anne Duffy writes of the theme of love. Her poem is a modern poem written by Carol Ann Duffy in the 1980's. This poem is not a sonnet. Moreover the form of the poem is irregular. It is free style and unconventional. It denies the clich� image of love. Carol Ann Duffy like Shakespeare writes in response to the social and political attitudes at the time. 'Valentine' challenges ideas of "normal" Valentine card or present. In this intense love poem Duffy rejects traditional symbols of love, such as 'red roses 'or 'satin hearts' in favour of 'an onion'. The tone is very important in this poem. Carol Ann Duffy gives her lover an onion instead of the normal clich� gift of roses and chocolates as they are over used and therefore lost all romantic value. She has put more thought into her gift and come up with something with hidden depth. Carol Ann Duffy's confident and direct tone reflects how powerful women's opinions were now becoming and how they were now respected in all societies. The eighties were a time when contemporary issues like equal rights for women were emerging. ...read more.

It suggests the shrinkage of the experience and how marriage can reduce love in some cases. The word 'Lethal' portrays the strong, uncontrollable nature of love. It also symbolizes the pain it can bring. Carol Ann Duffy concludes with the strong direct blunt statement like Shakespeare, " Its scent will cling to your fingers, / Cling to your knife." This is symbolic of once you have fallen in love you cannot easily forget it and its lingering affect. This is suggesting a kind of unavoidability, and a kind of desperation - stronger than the earlier, less striking stay on your lips, and the verb itself is repeated twice The word 'Knife' shows the dangerous side of love. A knife is 'natural' and harmless in its association with an onion - but it now carries over into something a little unplaced in its association with love - suggesting something of Love's ability to damage and hurt others. It emphases the lethal and complicated effect and problems it can create. The Poem not clearly conclusive but ends with implied threat - kitchen knife may become a weapon for a jealous lover. We know this is a possibility as other language in the poem is sharp at times and has a threatening element such as the word 'lethal'. The verb 'cling' implies the lingering of feelings or the lingering of a jealous lover wanting to be close by and the possibility of a threat that if they can not have love then they wont want anybody else to have what they think should be theirs. ...read more.