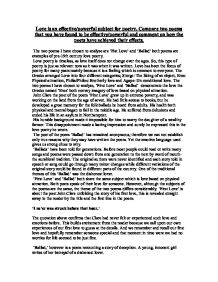 Love is an effective/powerful subject for poetry. Compare two poems that you have found to be effective/powerful and comment on how the poets have achieved their effects. The two poems I have chosen to analyse are 'Fist Love' and 'Ballad' both poems are examples of pre-19th century love poetry. Love poetry is timeless, as love itself does not change over the ages. So, this type of poetry is just as relevant now as it was when it was written. Love has been the focus of poetry for many years mainly because it is a feeling which is common to everyone. The Greeks arranged Love into four different categories; Storge: The liking of an object, Eros: Physical attraction, Philia/Philos: Brotherly love and Agape: Un-conditional love. The two poems I have chosen to analyse, 'First Love' and 'Ballad' demonstrate the love the Greeks named 'Eros' both convey imagery of love based on physical attraction. John Clare the poet of the poem 'First Love' grew up in extreme poverty, and was working on the land from the age of seven. He had little access to books, but he developed a great memory for the folk ballads he heard from adults. His health both physical and mental began to fail in the middle age. He suffered from delusions and ended his life in an asylum in Northampton. His humble background made it impossible for him to marry the daughter of a wealthy farmer. This disappointment made a lasting impression and surely he expressed this in the love poetry he wrote. The poet of the poem 'Ballad' has remained anonymous; therefore we can not establish only true reasons why they may have written the poem. Yet the emotive language used gives us strong clues to why. 'Ballads' have been told for generations. Before most people could read or write many songs and poems were passed down from one generation to the next by word of mouth- the aural/oral tradition. ...read more.

The words and phrases used by both poets have evidently created different settings and atmospheres. In the poem 'First Love' a tense, exciting atmosphere about consuming passion is built by the usage of short, succinct words: '...sudden...' and '...rushed...' The words above create anxiety from the reader, thus creating a tense and uneasy atmosphere. The words can be said very quickly and easily and said together they sound almost like they are part of a fast-paced plot. Because the words can be said with such ease the reader has little chance to ponder over what they are saying, therefore they are left bewildered and as result feel intimidated by what has happened. Clare has allowed the reader to feel the impact he felt when he met his first love. Another line, Clare uses to built on the nervousness felt by the reader is as follows: '...seemed midnight at noonday...' The above quote adds to the anxiety but not for the same reasons as before, this time however the reader is made to feel uneasy as the quote is paradoxical because it cannot be dark at midday. The uncomfortable feeling provoked by the quotes surrealism is heightened because of the use of the word 'midnight.' We know that at 'midnight' it is dark and dark is often associated with frightening scenarios, the worst being death. As you can see the reader is clearly left with a startled response to this particular line in the poem. The setting and atmosphere in the poem 'Ballad' challenges our perceived view of love, the poem does not speak of a blossoming relationship but instead conveys connotations of death. As a result the atmosphere is poignant and depressing; this is shown by the following quote: '...our souls with God, our bodies clay...' This line is informing the reader that the young girl wants her and her unborn baby to pass away as she feels there is no need to live anymore. ...read more.

However, both poems are told in the first person narrative as they both use 'I' on a number if occasions. The poem 'First Love' is Clare's account of his emotional reactions of when he first fell in love. He challenges our perceived rose-tinted view that your first love brings happiness and excitement. He sheds awareness that for some this is not the case and that for some such as himself it is a painful experience as they may not love you in return. 'And stole my heart away complete.' The quote above reinforces this idea that love is uncontrollable and even if you fall in love with someone whom may not love you in return you still love them and you have to stand by and watch your true love with someone else instead of you. The use of the word 'stole' echoes the thought that you have no choice and influence on what happens as you cannot control the emotion that is love. The poem 'Ballad' has been written from the young girl's point of view, which makes the poem seem more realistic as she is actually speaking of her experience and telling her story. Within 'Ballad' we learn that a young, naive girl is deceived by a man and she latter becomes pregnant by this man. This poem openly opposes the adage that love is sweet and harmless, however this time we are left with another message also. One that speaks of the truth that we can all be easily deceived especially when we are youthful and na�ve. '...He came and smiled and stole it then...' The above quote builds on this idea that the poet was trying to shed light on the issue that sometimes an infatuation can be mistaken for love. The use of the word 'stole', once again implying this idea that she had no command and power over what was happening. The poet also sheds awareness that at one time we are young and immature and we do not have the benefit of experience to help us through these times. ...read more.