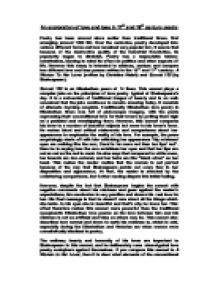 Love &amp; Loss - analyse and compare two different love and loss poems written in the 19th and 17th century: A Woman To Her Lover (written by Christina Walsh) and Sonnet 130 (by Shakespeare).

An exploration of love and loss in 17th and 19th century poetry Poetry has been around since earlier than traditional times, first emerging around 1000 BC. Over the centuries, poetry developed into various different forms and has remained very popular but, it seems that because of the destructive quality of the Industrial Revolution, its popularity began to diminish. Poetry has a respectable history nonetheless, bearing in mind its effect on politics and other aspects of life. However this essay is intended to address, analyse and compare two different love and loss poems written in the 19th and 17th century: A Woman To Her Lover (written by Christina Walsh) and Sonnet 130 (by Shakespeare). Sonnet 130 is an Elizabethan poem of 14 lines. This sonnet plays a complex joke on the principles of love poetry typical of Shakespeare's day. It is a subversion of traditional images of beauty and is so well-conceived that the joke continues to remain amusing today. It consists of alternate rhyming couplets. Traditionally Elizabethan love poetry in Elizabethan times was full of picturesque imagery, with the poets expressing their unconditional love for their lovers by putting them high on a pedestal and worshipping them. ...read more.

She makes it clear that she does not want to be a passive wife "to make of me a bondslave, to bear you children, wearing out my life, in drudgery and silence, no servant will I be". She clearly has modern opinions and strong views about life and does not want to be a traditional wife, unlike many women of her time. Moreover, the phrase "co-equal love" emphasises how she wants equality within her relationship between her partner and herself. This idea is quite revolutionary as during the 19th century, it was very uncommon for a woman to be treated the same as a man and still is today. Women had virtually no legal rights within a marriage so her request for equality is very modern. Christina was a very unusual and forward thinking woman, which was unusual, especially during the 19th century. It was also unusual for women to voice their opinions, especially about something which many women during that time did not often talk about. She is stating her conditions for a marriage to her lover. This makes the poem seem like it is a marriage contract as she lists what she desires in her partner, especially in the last paragraph, "...that so together we may know the purity and height of passion, and of joy and sorrow, then o husband, I am yours forever". ...read more.

Sonnet 130, on the other hand, consists of alternate rhyming couplets. However, in A Woman to Her Lover, there are verbal patterns. Each verse contains a single idea and in the first three a question and answer are implied and given. Within the verses, too, there is pattern and repetition. For example, with verbs: 'to bend...to make...to bear...' (Verse 1), with nouns: 'deed and word and wish' (verse 2), with phrasing: 'My skin soft only...my body supple only...' (Verse 3), with names: 'comrade, friend and mate' (verse 4), with alliteration: 'wakened woman' (verse 3) and with grammatical structures: 'if you think...' (Verse 2/3); 'if you ask...Then' (verse 4). To conclude, love and loss poems written in the 17th and 19th century have very strong effects on the readers because of the powerful messages which the poets create due to the effective language used and atmospheres created. Love and loss are two strong emotions but also very different and similar in a way. Such an emotion, which can bring about opposing feelings such as joy and devastation, is love. It is a complex emotion. Love is also an extreme emotion to feel and during the 17th and 19th century many poets expressed their feeling through poetry to share with other people. ?? ?? ?? ?? ...read more.