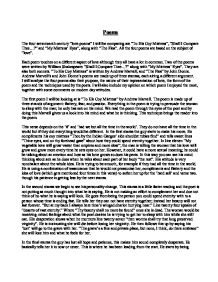 Poems The four seventeenth century "love poems" I will be comparing are "To His Coy Mistress", "Shall I Compare Thee...?" and "My Mistress' Eyes", along with "The Flea". All the four poems are based on the subject of "love". Each poem touches on a different aspect of love although they all have a lot in common. Two of the poems were written by William Shakespeare: "Shall I Compare Thee...?" along with "My Mistress' Eyes". They are also both sonnets. "To His Coy Mistress" is written by Andrew Marvell, and "The Flea" by John Donne. Andrew Marvell's and John Donne's poems are made up of three stanzas, each airing a different argument. I will analyse the four poems also their purpose, the nature of their representation of love, the form of the poem and the techniques used by the poets. I will also include my opinion on which poem I enjoyed the most, together with some comments on modern day attitudes. The first poem I will be looking at is "To His Coy Mistress" by Andrew Marvell. The poem is made up of three strands of argument: flattery, fear, and passion. Everything in the poem is trying to persuade the woman to sleep with the man; he only has sex on his mind. We read the poem through the eyes of the poet and by doing this Marvell gives us a look into his mind and what he is thinking. This technique brings the reader into the poem. This verse depends on the 'if' and 'had we but all the time in the world'. They do not have all the time in the world but if they did everything would be different. In the first stanza the guy starts to make his move. He compliments his coy mistress "Thou by the Indian Ganges' side shouldst rubies find" and tells sweet lines "Thine eyes, and on thy forehead gaze" about how they could spend eternity together. ...read more.

"Just so much honor, when thou yield'st to me, will waste, as this flea's death took life from thee". The second metaphor would be "marriage bed and marriage temple" line thirteen. The flea is a place where the speaker and woman can have a marital relationship. In fact they are "more than married" line eleven. He is trying to get this woman to have the same relationship on the outside of the flea as well as the inside. In this stanza he changes from sexual language to religious language. This is because the woman is threatening to squash the flea. It is also the fact that his sexual language is not working so he wants to show that he is genuine. In the final part of the second stanza the speaker refers to killing the flea as murder. "three sins in killing thee" line eighteen. He and the woman would be killed inside the flea if she follows her natural instinct to squash the flea. The woman does not strike me as na�ve like the coy mistress. She is not susceptible to Donne's pressure. She is independent-minded, more his equal. In the third stanza the woman kills the flea. When he says "purpled thy nail, in blood of innocence?" in line twenty, he is asking why she has shown no regard for the innocence of the flea and why is she so protective of her virginity. We do not know that she is still a virgin but the poet takes it as she is so I would assume the same, although the flea bites them both which means that they have to be close together. Could they already be in bed? She thinks she has won the argument but the speaker then turns the actions of the woman against her. She has said "thy self nor me the weaker now" but, he responds by implying that there is no change in their status so there would be no change in their status if they took the relationship to an intimate level. ...read more.

Though he is saying it light heartedly and is not taking himself seriously so I doubt the woman would be. Andrew Marvell's technique is bulling and finally desperation in an attempt for his mistress to succumb to his advances. The poem that I find most likeable is "My Mistress Eyes" by William Shakespeare because I think it is touching and romantic. I would like to be the mistress who has this poem read to them. It's pleasant because it is displaying love not lust. If this was said to you, you would know the person really thinks a lot of you. Although my favourite is "The Flea". I got really into this poem and felt passionate hatred for the speaker. I like the way in which the poem is written. I think the woman would have been more annoyed than feeling hatred as she could not get rid of him. Yet she did not leave. He kept her interested maybe intrigued with what he was going to come up with next. Attitudes have changed in many ways in the last four hundred years but the values are still the same. Years ago it was seen as acceptable for men to go out and have a night of lust, but always with a "lady of the night". Prostitutes are still treated as lower class citizens. Men and women can have a one night stand now and nothing would be said. A person's virginity is not regarded in the same way. In "Grease", the movie, there is a song called "Sandra Dee" where they make fun of her virginity "strangled with virginity". The typical attitude of the 1950s women is to guard there virginity but the pink ladies are mocking the normal attitude. They are rebels. The tradition of waiting until your wedding night has long gone; women do not guard their virginity anymore. In the 1960s the invention of the contraception pill made sex free and easy. It is accepted that people are not virgins when or if they marry. ...read more.