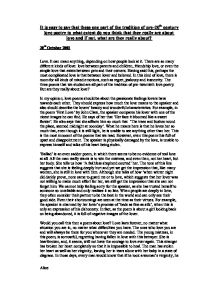 It is easy to say that these one part of the tradition of pre-20th century love poetry to what extent do you think that they really are about love and if not, what are they really about? 20th October 2003 Love. It can mean anything, depending on how people look at it. There are so many different kinds of love: love between parents and children, friendship love, or even the simple love that exists between pets and their owners. Having said this, perhaps the most complicated love is that between lover and beloved. In this kind of love, there is room for all kinds of mixed emotions, such as regret, jealousy and insecurity. The three poems that we studied are all part of the tradition of pre-twentieth love poetry. But are they really about love? In my opinion, love poems should be about the passionate feelings lovers have towards each other. They should express how much the love means to the speaker and also should describe the lovers' beauty and wonderful characteristics. For example, in the poem 'First Love' by John Clare, the speaker compares his lover with one of the nicest images he can find. He says of her that 'Her face it bloomed like a sweet flower'. He also says that she affects him so much that 'The trees and bushes round the place, seemed midnight at noonday'. ...read more.

The repetition of 'regret' suggests how regretting the mistress and it sticks on our head as we read, as if the writer is trying to warn us to think ahead before acting. The constant speed and the rhyming of 'Ballad' make the poem very memorable. Moving on to 'To his coy mistress'. While the mistress is still reluctant to sleep with the writer, the man is trying every single way that he can think of to win her over. First he makes all the wonderful promises, exaggerating them, impressing the lady. For examples, he claims, 'I would love you ten years before the flood, and you should, if you pleased, refuse till the conversion of the Jews.' This line is similar to the 'promising' statement in 'Ballad' when the shepherd says he will give the girl 'beds as fine as silk, and sheets for love as white as milk'. These were probably the sweet words and honeyed phrases that were told to the lady in 'Ballad' before the losing her virginity. No actual actions take place in 'To his coy mistress'. All he says is if he had time, he would wait forever, which is impossible. The poem also suggests that the man is more interested in the woman physically than in her intelligence, and her character. He would spend an hundred years 'to praise thine eyes, and on thy forehead gaze, two hundred to adore each breast, but thirty thousand to the rest'. ...read more.

'Ballad' is what might happen once a young girl's viginity is lost. In 'My last duchess', nothing about love is mentioned except for the woman's love of life. All it deals with is jealousy and the domination over woman by the fastidious duke. These poems show the bad aspects of love. They could be about love in a way, as love is a complicated matter. It can mean different things to every individual. It is crucial to think about the consequences before we love, as loving can end up badly, just as it did for the young woman in 'Ballad'. I found 'Ballad' very effective, as it is a warning. It warns us to think ahead before loving, before ending up like her. By telling us about her own experiences, it makes the poem more personal as if we as readers are in the same situation. The feeling of hopelessness is so strong and powerful that it touches us. The language in the poem is also very direct and simple but expressive. The girl expresses herself unreservedly, with deep, touching emotions, whereas in 'To His Coy Mistress' and 'My last Duchess', none of the speakers express any genuinely positive emotion. Many young woman in that period would have been warned against the same hopeless situation. 'Ballad'' is about love, the kind of love that makes us suffer, the tragic love, but a poem that alerts young women to predicaments, which can occur even now. Alice ...read more.