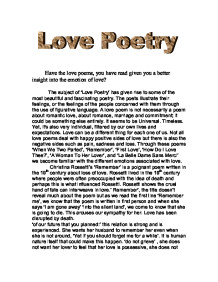 Have the love poems, you have read given you a better insight into the emotion of love? The subject of 'Love Poetry' has given rise to some of the most beautiful and fascinating poetry. The poets illustrate their feelings, or the feelings of the people concerned with them through the use of figurative language. A love poem is not necessarily a poem about romantic love, about romance, marriage and commitment; it could be something else entirely. It seems to be Universal. Timeless. Yet, it's also very individual, filtered by our own lives and expectations. Love can be a different thing for each one of us. Not all love poems deal with happy positive sides of love but there is also the negative sides such as pain, sadness and loss. Through these poems 'When We Two Parted', 'Remember', 'First Love', 'How Do I Love Thee?', 'A Woman To Her Lover', and 'La Belle Dame Sans Merci' we become familiar with the different emotions associated with love. Christina Rossetti's 'Remember' is a poignant poem written in the 19th century about loss of love. Rossetti lived in the 19th century where people were often preoccupied with the idea of death and perhaps this is what influenced Rossetti. Rossetti shows the cruel hand of fate can interweave in love.' Remember', the title doesn't reveal much about the poem but as we read the first line 'Remember me', we know that the poem is written in first person and when she says 'I am gone away' 'into the silent land', we come to know that she is going to die. This arouses our sympathy for her. ...read more.

'I shall but love thee better after death'. Elizabeth has proclaimed her love totally, even to the extremity of a spiritual dimension of love. So far in all poems discussed we have got views from women and now a view of love from the poet John Clare. His poem' First Love', is a contrast to 'How Do I Love Thee?'. It is a lyric poem. The poem is about John who was 'struck' with love and was so keen on knowing her that when he knew she wasn't meant for him he was forlorn and dejected. The title itself is self-explanatory. John Clare had experienced 'First Love' in his life. This is written in a first person technique so we come to know how it feels to be broken hearted. In the first stanza the physicals symptoms of John are focused on. It is his first experience of love 'so sudden and sweet' he finds his 'face turned pale as deadly pale' compared to the 'face it bloomed like sweet flower', of the girl. He has fallen in love with physical beauty and his legs 'refused to walk away', since this is his first experience he is totally overwhelmed by his feelings, he is captivated by her physical charms and he expresses his feelings in detail. As he turns to 'clay', he feels completely helpless. The emotion of love has taken over him completely. In the second stanza the physical symptoms are still taking place now blood rushing to his face and it seemed 'midnight at noonday'. He was now blinded by love and nothing else mattered. John uses music to express love, 'they spoke as chords do from a string,', a simile comparing his unspoken words to the music created by a string instrument. ...read more.

He 'gave commands', to kill her, love has become possessive. He could not bare the fact that she used to spend much time with other men rather than her own companion. Towards the end of the poem Robert show how the Duke say that he would tame his new wife, she would be dominated if he was not listened to, 'taming a sea horse'. We can understand for the Duke, obviously when he sees her 'round the terrace' riding on the mule with 'all and each' ,everyman jealousy is the only thing that would take over his emotions. The language technique of the writer is very indirect because the Duke doesn't want anyone to know that he has killed his own Duchess. This poem is a comparison to 'A Woman To Her Lover', there Christina talks about dominating partners and what they want from women and with this we get a pretty clear idea of the Duke. In conclusion I would say that love can be of many types and it can lead to so many positive sides and negative sides. Love can also be interrupted by death, jealousy. From Christina Walsh's poem 'A Woman To Her Lover', I have learnt that love should not only be service, worship, physical desires, but there is more to it. Love should be from the heart and not from the mind unlike John Clare 'First Love'. I have also noticed that love has a spiritual and physical meaning. It is also divine as to Christina Walsh and Elizabeth Browning. Through 'First Love' I would be aware of the beauty of women around the world but not let loose of my self and if failed not to give up all hopes like John Clare. The emotions love in these poems has given me a different insight on love. ...read more.