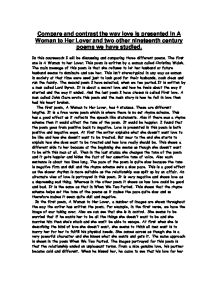 Compare and contrast the way love is presented in A Woman to Her Lover and two other nineteenth century poems we have studied. In this coursework I will be discussing and comparing three different poems. The first one is A Woman to her Lover. This poem is written by a woman called Christina Walsh. The main message of this poem is that she refuses to let her husband or future husband seems to dominate and use her. This isn't stereotypical in any way as woman in society at that time were used just to look good for their husbands, cook clean and run the family. The second poem I have selected, when we two parted. It is written by a man called Lord Byron. It is about a secret love and how he feels about the way it started and the way it ended. And the last poem I have chosen is called First love. A man called John Clare wrote this poem and the main story is how he fell in love then had his heart broken. The first poem, A Woman to Her Lover, has 4 stanzas. ...read more.

When he kissed her, he came to see that his love for her wasn't being reciprocated. In sort of the same way, the images go from positive to miserable, whereas in the first poem, they go from miserable to positive. Other images shown in this poem is that his partner is well known and since they have broken up she has been talked about by local people. He becomes ashamed that he had an affair with her as everybody has been talking about it. Although she is able to easily forget about their relationship, he finds it harder to and has an uncertainty of what to do whenever he sees's her. So by looking at the images presented by each poem we can see that the images in the second poem show more of a negative and sad image of love. The author also portrays the man in a light that shows him that he has done no good because "In secret we met" shows that he feels ashamed of being with her and doesn't want his friends finding out, by doing this he has destroyed a woman's reputation by undemanding her. ...read more.

In the same way, the poem 'first love' talks about the weather and particularly about the cold. 'Are the flowers the winter's choice?' This is a rhetorical question and is asked because he feels as though it is winter because his relationship has ended. Winter is not usually used for love, flowers are. And because there are flowers around, he asks if they are winters choice because the world is carrying on although he is hurting inside. This technique shows that love in these two poems has been presented in a negative way because there emotions of love are being presented as winter. Overall, I fink that in the first poem, the presentation of love is changed. It goes from negative to positive at the end. The other two poems stay the same throughout. They both are sad and dull. I think that the first poem presented love most interestingly as when you began reading it she seems very powerful and against love. But then at the end when she starts showing how love can be positive, we see a different image and the tone suddenly changes which is much unexpected. Although I think that the second poem presented love most honestly as it was his true feelings and the storyline made me want to read on. ...read more.