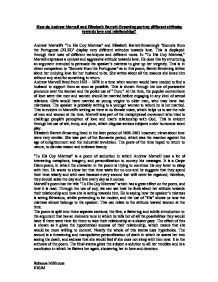 How do Andrew Marvell and Elizabeth Barrett-Browning portray different attitudes towards love and relationships? Andrew Marvell's "To His Coy Mistress" and Elizabeth Barrett-Browning's "Sonnets from the Portuguese (XLIII)" display very different attitudes towards love. This is displayed through their uses of different techniques and different tones. In "To His Coy Mistress," Marvell expresses a cynical and aggressive attitude towards love. He does this by structuring an argument intended to persuade his speaker's mistress to give up her virginity. This is in direct comparison to "Sonnets from the Portuguese" as in this poem, Barret-Browning writes about her undying love for her husband to be. She writes about all the reasons she loves him without any need for something in return. Andrew Marvell lived from 1621 - 1678 in a time when women would have needed to find a husband to support them as soon as possible. This is shown through his use of possessive pronouns over the woman and the polite use of "Thou." At the time, the popular conventions of love were that men and women should be married before engaging in any kind of sexual relations. Girls would have married as young virgins to older men, who may have had mistresses. The speaker is probably writing to a younger woman to whom he is not married. This is evident in Marvell's writing as there is no female voice, which helps us to see the role of men and women at the time. Marvell was part of the metaphysical movement who tried to challenge people's perception of love and man's relationship with God. This is evident through his use of wit, irony, and puns, which disguise serious subjects under humorous word play. Elizabeth Barrett-Browning lived in the later period of 1806-1861 however; views about love were very similar. She was part of the Romantic period, which was the reaction against the age of enlightenment and the industrial revolution. ...read more.

He uses great lengths of time that are used to flatter her on how long he could look at her body. They are ridiculous lengths of time however, which can show the insincerity of his feelings. "For, lady, you deserve this state, Nor would I love at lower rate." Here, the speaker is saying how the woman deserves the best of everything, especially his love and also it shows the women the least that he will do for her, which is effective in that she would be able to see how little he will do to keep her happy. The second stanza is the antithesis, the pivotal point of the poem in which he stops flattering her and begins to threaten her and be manipulative. "But at my back I always hear Time's winged chariot hurrying near" This quotation is a personification of Time as the Greek God, Apollo, the God of the Sun. This represents days going by and missing what you want to do, if you waste them, bringing up Carpe Diem again. This helps to persuade the woman as she sees how time could be just behind her back. There is a manipulative tone, which comes through on the "but," which is also the pivotal word of the poem. When the speaker uses the quotation; "And yonder all before use lie Deserts of vast eternity." It can be seen in many different ways. Desserts are huge and barren; they seem endless. He is saying how if she does not sleep with him, her life will become like a barren desert. In addition, nothing can grow in a desert, so he is suggesting that she may be infertile, making her a less suitable wife. Because of the sands in deserts, it could be linked to a sand timer, indicating her ebbing away life and in turn, her chance of finding a husband. ...read more.

She is telling him that she loves him with the same intensity as she mourned her family with. When she lost her family, she began to lose faith in God, and he has replaced that faith with his love. She uses connotations of marriage to display her deep, sincere love for her husband-to-be. "I love thee with the breath, smiles, tears, of all my life!" This is similar to wedding vows as she is saying how she will love him with every part or her life, and during the best and worst parts of it. She was very religious and this is clear in the poem, "and, if God choose, I shall love thee better after death." This is a striking contrast to Marvell's poem as Barret-Browning is saying how she will love her husband better after she dies, if they are in heaven together and makes death seem like a hopeful thing. Whereas, "To His Coy Mistress" is all about giving up after death, with no mention of heaven and the fact that no one will love each other after death. Andrew Marvell and Elizabeth Barret-Browning show different attitudes towards love and relationships through different uses of their lives and how long it would take them to fall in love. Marvell's poem, whilst perhaps quiet pleasant on the surface, is, in fact, full of crude sexual connotation and threats. Whereas Barret-Browning has brought all of her love forward to tell her husband how she feels. Her poem shows the intensity of Barret-Browning's love for her husband-to-be whilst writing and links it back to her past and her real experiences to prove her love, where as Marvell give past event in myth to prove his love, perhaps not as convincing. Although this may have been effected by their genders and poetic groups, "Sonnets from the Portuguese" seems like a more genuine, sincere and flattering poem with much nicer imagery. "To His Coy Mistress" seems to be full of sex and manipulation and does not seem to have the same effect on the reader. ?? ?? ?? ?? Rebecca Millhouse E10JM ...read more.