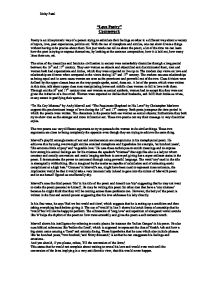 "Love Poetry" Coursework Poetry is an idiosyncratic way of a person trying to articulate their feelings or other in a different way about a variety of topics, love, past experiences, politics etc. With the use of metaphors and similes, one can show diverse things without having to be precise about them. Not just words can tell us about the poem, a lot of the time we can learn how the poet is trying to express themselves, by looking at the sentence composition, how it is laid out, how many lines there are, etc. The roles of the masculine and feminine civilization in society were remarkably dissimilar through a long period between the 16th and 17th century. They saw women as objects and objectified and discriminated them, men and women both had expectations and duties, which they were expected to live up to. The modern day views on love and relationship are diverse when compared to the views during 16th and 17th century. The modern era sees relationships as being equal and in some cases women are seen as the prominent and powerful out of the two. Class division were defined by the upper classes base on the way people spoke, acted, dress etc. A lot of the poems which were written in this time, talk about upper class men manipulating lower and middle class women to fall in love with them. ...read more.

And that after death, 'And yonder all before us lie, Deserts of vast eternity.' There is nothing, giving an agnostic view that there is no heaven or hell.. The next line, 'Thy beauty shall no more be found', saying that you will be beautiful when alive but when dead no one would be able to see that beauty. On line 26, there is a caesura, (short pause) halfway through the line just after 'My echoing song...' as the next section uses even greater shocking imagery: '...then worms shall try. That long-preserved virginity, And your greater honour turn to dust,. And into ashes all my lust:' He is saying that after death no one will be able to get to you but the worms and that her honour in preserving her virginity is going to be worth nothing when she's dead. Through use of penetrating words and displeasing imagery, he is able to shock his lover. And that, even though, death may be peaceful, 'The grave's a fine and private place, but none, I think do these embrace.' no one will be able to love her when she's dead. So as to remove the seriousness from the last section, the final section uses delicate ironic understanding to persuade her that love is a positive thing. ...read more.

On first scrutiny of the final verse: 'The shepherds swain shall dance and swing, For thy delights each May morning: If these delights thy mind may move,. Then live with me and be my love. It seems that it will be happy day when the writer's love decides to live with him, the May morning historically being a day to declare ones love. On closer inspection, in the third sentence, the word mind is very important. This word shows that the whole persuasion of the poem is actually conceived and imaginary, possibly even a deliberately conceived dream to show off and manipulate the writer's lover, the gender unknown due to the homosexual nature of the writer. The poem, even though it may seem so far-fetched and imaginary, would have been very successful. It was aimed at aristocrats, the main readers at the time (education still meant most common people could not read or write), using Court Pastoral Tradition, very popular amongst aristocrats as it combined sophisticated living with the simplicity of the country. Throughout this time period many other writers shared the same view or were against it. "Women to her lover" by Christina Walsh, "The Beggar Women" William King and "Sonnet 130" William Shakespeare all have their own views. "A women to her lover", shares a more dominant view on the feminine side, it talks about a women getting her revenge on a man. Ricky Patel ...read more.